Man Camp: Why Do I Need Pals Anyway?

Men today get told all the time in all sorts of ways that they have to be self reliant badasses who can do anything and have anything, just by being tougher, smarter and as it turns out, lonelier, than the other guy.

We get bombarded by heroes that are solo operators (Jason Bourne, James Bond, Jack Reacher). They show us one guy, taking the world by the balls and living the dream. Making his own way, by his own rules.

Being a solo operator is terrible. I don’t care how tough, cool, or awesome you think you are. Whatever game you’re playing, you’re not reaching your fullest potential playing with yourself. We are made for the pack. How exhausting is it to be solo? Every problem you face, you have to solve. Every struggle, you own. You ever try moving a couch by yourself? Of course not! It is obviously an exercise in futility. So is living your life as a solo operator. What about when your kid comes home and rips your guts out telling you he thinks you suck? You think you’ll be equipped to handle that on your own? No, you’ll need a pal (and probably Jesus to keep from choking him out). You’ll need a man who knows you, and your little turd son, well enough to speak truth into both of your lives. How about that day you get that big promotion at work? How fun will it be celebrating with a bunch of bros who are either secretly jealous or just don’t even care? Oh sure, you’ve got a sweet honey in your life but I’m telling you, that won’t cut it. The right wife or girlfriend can be a huge force multiplier in your life but she can’t, and shouldn’t, be your best friend. Hell, I believe that calling your wife your best friend undervalues what a wife is. She cannot replace having pals.

You were meant for more than lonely self reliance.

I’m a friendly guy. I’m about as extroverted as a human can possibly be. I’m also a twin so I’ve literally been hanging out with someone since the moment the spark of life kindled inside of me. If there is one thing I’m built for, its buddies. And man, have I had ‘em. I’ve had golfing buddies, gym buddies, drinkin’ buddies, all sorts of buddies and ya know what, it sucked. I was surrounded by good dudes but not great men. Don’t get me wrong, there were some solid guys among those buddies but none of us were doing a very good job of being pals. That all changed when one of those buddies decided we should start a Dude Group.

Dude Group is like a bible study only with bourbon and a strict rule that we never call it a bible study. Dude Group meets once a week, every week, almost without exception. It’s a foundational part of my life. This isn’t a bunch of guys grabbing beers and talking Bengals. We get together and talk about Jesus and our families and work and struggles and victories and all sorts of things. Those men fill a space in my life that my wife couldn’t (and shouldn’t). They make me a better me. A better husband. A better leader. A better Christian. They give me a man’s perspective on things that I could never get on my own. We’ve helped each other heal from divorce and infidelity. Helped each other through career decisions, family struggles and financial crisis. We even supported each other through the death of one of our dudes.

These guys are pals.

It seems like we’ve forgotten what our fathers knew. Give me a bunch of scrappy losers looking for redemption fighting Nazis (pronounced Naht-zi). Or some guys bonded by the struggle of war going back into the fray to rescue their dudes. I just want to see a team. I want to know those dudes have each other’s backs. That they rely on each other, make each other better, that they’re all working together. That they’re not just buddies, they’re pals. Pals are friends that have full access. They know you secretly think your father in law is a douche. That your second kid is your favorite. They know you really aren’t doing enough to show your wife she is appreciated. They know you’re slacking at work. And they’ll call you out on all of it. (Maybe not the second kid part, because you’re right. That kid rocks!) They’ll push you, even pull you if needed. They’ll also show you the great things you just can’t see about yourself. They’ll tell you they respect the way you build into people. That they aspire to be more compassionate, like you.

They’ll lie to you and tell you that your Mank-Top is super hip. 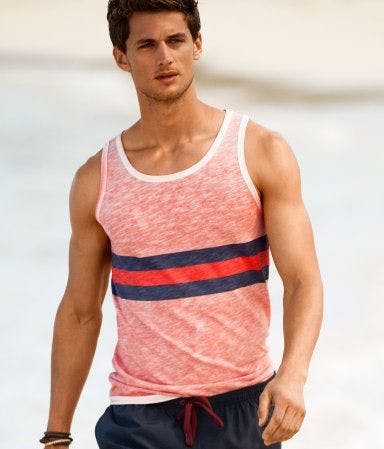 That the way you raise your kids is an inspiration. They’ll also make fun of your haircut and the fact that you can’t talk without long pauses. They’ll do life with you. All of it. The sloppy stuff too. You need pals.

If you’re brave enough to be vulnerable. Strong enough to be real. And bold enough to take a step outside your comfort zone, get you some pals. Maybe you’ll find them at MAN CAMP. Regardless, your life will be better in ways you can’t imagine if you do. Jesus had pals. You should too.