Parenting Styles: How To Find One That Works

When I started my parenting journey, I was pretty naive. I thought parenting would be a breeze (seriously, I thought that). I was going to be the fully present and patient mom, responding to tantrums with kindness and respect. And then I had my first kid and realized how wrong I was. I felt unprepared to raise these little humans and, at times, considered myself a total loser parent. If you’ve had these same thoughts or feel less equipped than you’d like to lead the kids in your home, here’s a simple framework that has helped me identify my parenting styles and make plans to get where I wanted to be—a better parent.

When looking around for the perfect parent to learn from, I came up empty. Then I realized that my heavenly Father, God, is the perfect model of parenting. He’s the beautiful combo of grace and truth (or in this article, we’ll sometimes call it discipline). Even if you don’t believe in God, this example can dramatically change the culture of your home. We won’t ever be perfect, but we can train in becoming a more competent and confident parent.

Whether your kids are in diapers or 45, it’s never too late to start parenting like God. He models perfect parenting with discipline AND grace.

Our job is to help our kids become the best versions of who God created them to be. Short term compliance, straight As, and all star athletes are not the long term goals.

Don’t get me wrong, doing well in school and respecting adults are important. We should parent with the long game in mind. But how do we do it?

But as humans, we typically swing towards one or the other, and it usually gets twisted. “Truth” too often comes out as harsh rebuke or lecturing. “Grace” too often shows up as permissiveness or enabling.

When a child misbehaves, which all kids do from time to time—some more than others, as a parent who leans towards truth, we may quickly punish or even speak words that may shame our kids. When we’re fully focused on truth, with no grace, we may say things like, “I can’t believe you did that” or ask the rhetorical question, “What were you thinking?”

On the other hand, a parent operating primarily on the “grace” side of parenting may miss an opportunity to redirect or coach their child, maybe even doing their homework or task for them or ignoring the child altogether.

Neither of these responses leads toward our ultimate goal of long term character transformation. We may get kids who obey out of fear or to avoid punishment, but these methods typically don’t help our kids make deep and lasting changes. It rarely changes their heart. We want our kids to make wise choices even when we’re not there threatening, punishing, or cleaning up after them.

Think of this as a matrix (yes, that’s the x and y-axis you learned about in 5th-grade math). The vertical line is grace; the horizontal line is truth. There are four parenting styles created in this matrix. Let’s assess each one. While we do, think about how you parent and where you fall on the matrix. 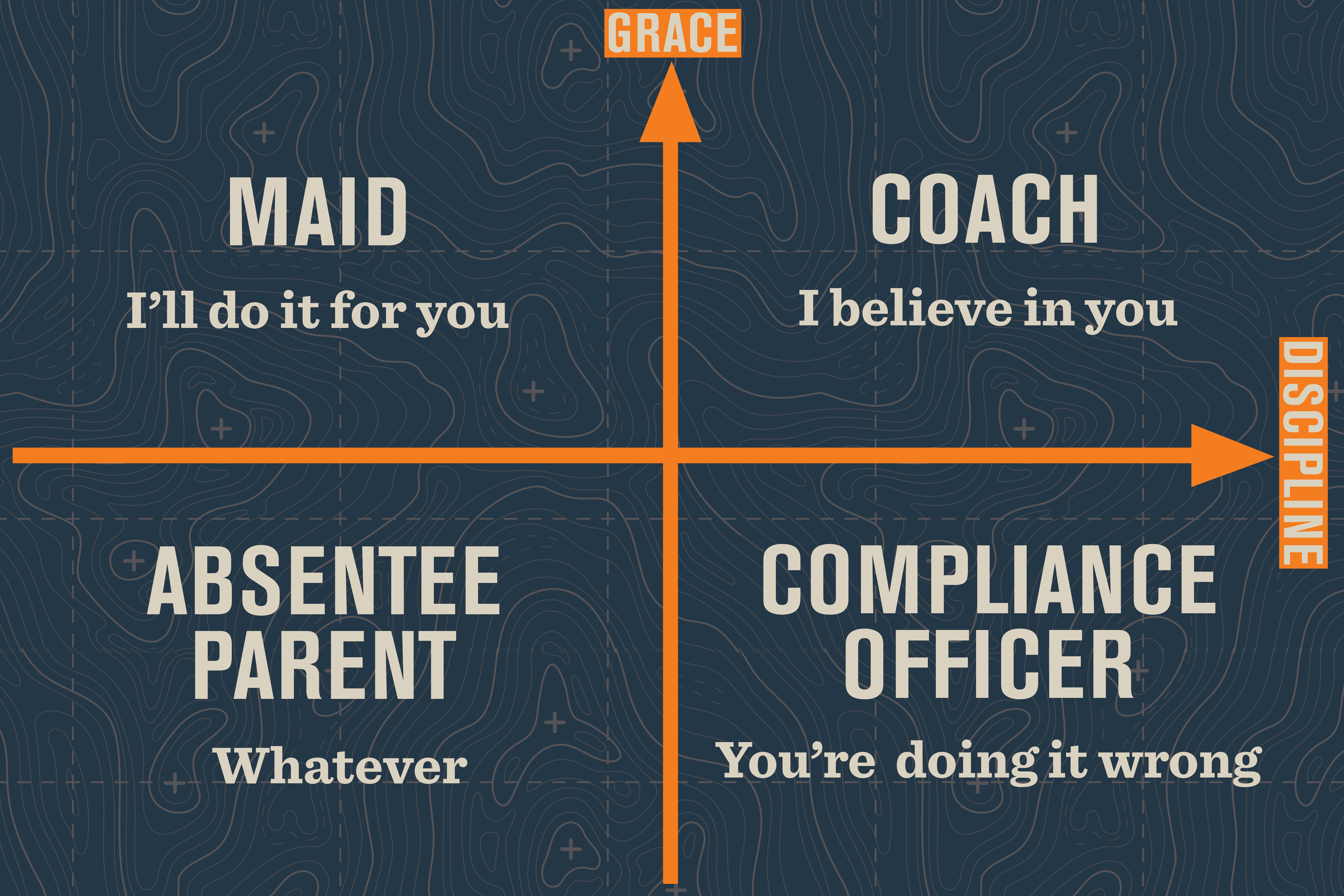 If you find yourself responding, “I’ll do it for you,” or you’re the parent who remakes their bed and does their science project, you may be a bit of a maid as a parent. You dish out lots of grace and empathy but very little discipline. In this style, we want everyone to be happy. Unfortunately, while we work to preserve peace with no conflict, tension grows because there is conflict—just no one is addressing it.

Maid parents are lawnmower parents, mowing down every obstacle or discomfort in their kid’s path, attempting to fix everything for the kid. Consequently, kids of maids grow to believe they’re incapable of figuring anything out for themselves. They don’t even think they’re capable of making their own bed “properly.” If you find yourself in this quadrant and want out, try instituting some basic rules. Some ideas would be to have everyone take their plates off after dinner, before playing on Saturday rooms have to be cleaned, or requiring homework to be finished before video games come out. You get the idea.

If you find yourself saying and thinking “whatever” frequently, this may be you. You’re not dishing out anything—no grace or truth. Maybe you’re worn out, or you’ve given up. I’ve been there. One of our kids had a really rough time in high school. She got into stuff she shouldn’t have been involved with. It was exhausting. So I checked out—temporarily. Things would happen, the school would call, and my response would be “whatever.” Fortunately, I did enjoy a nice little vacation as an absentee parent, but I didn’t stay there. I got back in the game.

One of the ways I re-engaged was to spend time observing my daughter. I’d sit in her room and take in my surroundings. I’d pray for God to reveal things about my daughter to me as I sat in her space. Be a student of your kid. Put your phone down and observe them. Notice how they interact with other kids. What kind of situations do they love, and where do they seem uncomfortable? Get back in the game. When you’re in this quadrant, you need more of both, so think—how can I give my kid more grace (actively forgiving them, not ignoring them) and more truth (training them, not yelling at them)? Your kids may be surprised by your renewed interest in them, so give them some time to warm up as you re-engage.

This one shows up as the parent who thinks their job is to call out what is wrong or how their kids can improve, rarely focusing on what is already great about their kid. They focus on discipline with very little grace. Fault finding is their gift—OK, just kidding, fault finding is not a gift to anyone. Compliance officers are all about the rules or doing things perfectly. Unfortunately, this doesn’t bring out the best in our kids and is contrary to how God parents us. Thankfully, when I’m headed the wrong way, as I have been on more than a few occasions, He often gently guides me back. I think about my college years. I was way off the path. Then after that “lost period,” God was someone I wanted to come back to. Consider, are you someone that your kids will want to be in a relationship with years from now?

If you realize you may need to loosen up a bit, rather than squash their initiative by telling them what they’re doing wrong, let your kids try something, let them take a risk. Years ago, our kids wanted to decorate our house for Christmas. We’re huge University of Kentucky basketball fans, and it was shaping up to be a great year. The kids wanted to decorate with a UK theme. We let them do it on their own with very little oversight. The project took several weeks, with our three oldest kids pooling their money and making multiple trips to Lowes. It was amazing and about as tacky as Christmas decorations come. Blue and white lights and all kinds of UK paraphernalia. It was really bad in all the best ways. As UK continued to win, the decorations stayed up for the rest of UK’s season—which, much to our neighbor’s dismay, lasted through the NCAA Championship Game. But our kids had a complete blast, and I learned to loosen up a bit. We still talk about those Christmas decorations, perhaps more than any other year. Let your kids try something new, don’t say no, and see what God teaches YOU in the process.

The final parenting style is “The Coach.” This style is BOTH grace and truth. When kids mess up, parents remind them, “I believe in you.” When times are hard, they communicate through their words and actions, “I see you, I hear you, I am with you.” Parents in this zone see their kids as God sees them, imperfect treasures with unlimited possibilities. We’re not God, so this is difficult. We must be intentional. And we’re going to fail. And when we fail, we can repent to our kids, ask for forgiveness, and get back up and keep on parenting. Rather than focus on their failures, we remind our kids who they are. They can do hard things. When they flunk a test, and we work with them to establish better study habits, we won’t give in and allow them to play video games before homework is finished. We can also remind them, “I see you’re upset by this decision. I love you. I know you can get your work done so you can enjoy your free time later tonight.” The truth stays the same, no video games now, but the grace acknowledges their feelings and empathizes with them.

When we keep in mind character transformation, we’re not concerned with how people think of us or if people judge our parenting. We know that it’s not about short term compliance—they didn’t cry or storm out of the house when I said no—but that they felt cared for in how you responded and in the decision you made. Another tip, while you’re operating as the Coach, is to not be personally offended by what they are doing. Don’t be offended that they threw dinner on the floor or even punched a hole in your new drywall. It makes it easier for you to think more about them and what’s best for them, more so than yourself.

Operating as a Coach, like God as a Father and King, is not a balance between nice and tough. It’s fully both truth and grace—just like Jesus.

John 1:14 says, “The Word became flesh and made his dwelling among us. We have seen his glory, the glory of the one and only Son, who came from the Father, full of grace and truth.”

As we work to be both fully truth and grace in our parenting styles, it may seem overwhelming. Many days may be about survival, with little time to consider long term goals. But today, as you examine how God parents you, and as you consider where you may need to dial it up, turn the grace or truth knob up, choose one step you’re going to take.

Maybe it’s putting down your phone and really observing your kids or letting them try something without correcting them or stepping in to fix it. Whatever it is, ask God to fill you with HIS truth and grace as you step into parenting styles that look more like him. It won’t always be easy, but helping our kids find their way, build their character, and grow into the adults that God has created them to be is worth the extra effort.

Process, journal or discuss the themes of this article - here's a few questions to get the ball rolling...

Parenting Styles: How To Find One That Works

0 people are discussing these questions

You must include at least one person

Got it! Enjoy your discussion.

THE POWER OF CAMPING

NEW YEAR, NEW YOU, NO NUDES

DON'T BE A POLITICIAN AT HOME