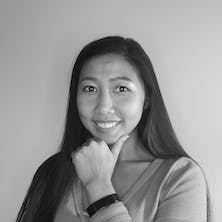 I grew up in Thailand in the Buddhist faith and attended a Catholic school. I never felt like I really fit in and it always seemed like I wasn’t good enough. After visiting the United States as a tourist, I married a man from Cincinnati. We ended up getting divorced and a couple of years later, I met a guy that I thought he was everything for me. We dated for a few years and then he and I broke up. I felt like a failure at being in a relationship. I felt like I was at the lowest place of my life. I was living in Oakley at the time and started searching online for a place to help me. I had seen Crossroads before but never thought it was a church because of the way the building looked. I ended up finding out it was a place for people who didn’t know God to explore. I decided to give it a try.

When I came to Crossroads, I felt accepted and never felt like an outsider. I felt like I could come as I was and no one expected me to be perfect or considered themselves perfect either.

The first way that God broke through for me was in my finances. Growing up in a third world country, I held tightly to my money that I earned. I attended a Saturday service when Crossroads was talking about sponsoring children in Nicaragua through Compassion International and decided to support a girl there. When I went back to work on Monday morning, I received a raise. God showed up for me and showed me that He had my back. I haven’t worried about money since then no matter how much is in my account. I learned then that God will bless me when I let go of what I think I know to do something He calls me to do.

A few months later, I decided to get baptized. Even though I believed in God, I still had a lot of questions but I didn’t think I was supposed to and didn’t have anywhere to share them.

Eventually, I got connected to an Alpha group. There I found a place to talk about my questions and my doubts and learned that other people have the same questions and doubts. I had an amazing experience especially because a guy in my group grew up Muslim and now believes in God. He and I had similar backgrounds and shared and learned together.

Alpha also changed the way I see and understand the Bible. I had always thought the Bible was written by men so I never spent time reading it, but now I know more about what it is and I can’t wait to learn more and read the Bible and discover more about the story of Jesus.

I’ve gone through a lot of changes in the past year. I started a restaurant business six months before Covid hit and lost all of my investment during the pandemic. I ended up moving to Florida and I’m building an online business because God showed me that I don’t need to be tied to a specific place or job or possessions. He calls me to live like Jesus did and love other people no matter where I am and has taught me that I really don’t need much. He has brought different challenges with my new career that are growing me to be better.

Now, I’m volunteering with Alpha as a leader. While I’m still learning and have questions and I’m not a super religious person, I know that the people in my group are just like me and have doubts and questions. I feel like I’m not alone and I think my story can help other people feel that way too. When is the time if not now to do something and share about the experiences that God has worked in through me? -King P.