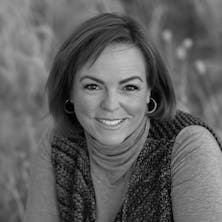 That was a Wednesday. That Sunday, I was driving with my 3- and 4-year-old kids when we passed Crossroads and I saw all of the cars turning in. I’m an esthetician and have had many clients, colleagues and friends over the years who were part of Crossroads and invited me, but it just never felt like the right time for me to check it out. For me that morning felt like a sign and a personal miracle.

I turned into the parking lot and we walked through the doors. I didn’t know where we were going physically in the building but I also felt like I was running scared and unsure emotionally. It was like the greeters at the door knew because they scooped up my kids and I, took us right to Kids’ Club check-in,and I headed to service. I sat up in the rafters of the top balcony at first. I was born and raised Catholic, so this was all new to me, but I was overcome with emotion during worship and then when the message started I was looking around wondering if someone had been following me. It was so relevant to where I was in my life at that moment.

I kept coming back every weekend and started inching closer to the stage. After a few weeks I was a regular in the front row. That’s when I met Deb and Eileen. They saw me come early every week to sit in the front and encouraged me to start serving. I started thinking, ‘Yeah, why not? Everything I’ve received has been so amazing. I was met exactly where I was, what if I am able to meet someone where they are and pull them out of a spiritual hole?’ Now, I look forward to serving on the First Impressions team every other week.

Since I have started coming to Crossroads so many things have changed. I haven’t had a sip of alcohol since I left that morning in July, a feat considering I had substance abuse issues in the past. I’ve lost about 75 pounds, and while I couldn’t have run a mile before the pandemic started, I’m running at least 4 miles a few times a week and one of my friends from my small group and I will run the Flying Pig Half Marathon together this year. When I started leaning in and becoming more spiritually fit, physical fitness just felt like it followed. I took the 90-Day Tithe Test during the Blessed Life series and it has been amazing. I’m going through FreedUp now. Every resource I’ve received from Crossroads has just been a win.

I’m also starting my own business. I’m taking what I’m passionate about and bringing God into it to make it my ministry. I love helping people feel as beautiful as they are and as beautiful as God thinks they are. I’m a little nervous about going out on my own, but I have peace about it because I know I’m putting God at the center of the next chapter of my life. I know things won’t be perfect or always go the way I expect, but it will be God’s will and I know I’m being forged in those moments.

I think often about that first welcome to Crossroads and if it had failed where I would be right now. I get emotional when I talk about the past 22 months because it has been a long road but a redemptive road and if I didn’t have Crossroads during this divorce process and moving away from my marriage or even during Covid, I don’t know where I’d be. I actually shudder to think about it because I know it wouldn’t be good. I know for a fact that I am physically, spiritually, mentally and emotionally more fit than I’ve ever been in my life because I’ve had this community to lean into. __-Erica P. __