Where was God on the worst night of my life?

I remember exactly where I was when the answer came.

My wife and I had finally gotten our kids to bed, and the cool summer air was calling my name. Running is just as important to my mental health as my physical. So feeling the pull of the concrete, I found my shoes, put on my headphones, and was out the door.

I’d already gone almost three miles, and was coming around a blind corner, back to our house. I’d been asking one question the entire time I ran. Not out loud, mind you. That’d be weird. But I kept bringing my prayer, my thoughts, back to the same thing. I wanted an answer. And, to be completely honest, I was surprised when it came. Surprised enough that it broke my stride. I doubled over. If you’d have seen me, you’d have thought I ran too hard and was out of breath. That’s partially correct. I was finding it hard to breathe. Not because of my pace, but because the answer to my question floored me.

As an adolescent, on multiple occasions, a close friend betrayed my trust and perpetuated unwanted sexual acts on and towards me. Thank God, I had the wherewithal and ability after the first few instances of abuse to put boundaries up to stop it. But there was one critical thing I failed to do: tell someone. Anyone. For years, it was a deep secret kept between the two of us. And the effects of that were devastating.

Of course, you wouldn’t have known it from looking at me. I kept a cool, calm exterior. But inside, everything was in flux. I was wrestling with questions about my identity, my sexuality, my future, and most of all, about a God who supposedly loved me.

Where was God on the worst night of my life? I’m not the first person to ask that question. It’s as old as the earth itself. Most scholars believe the first book written in the Bible was Job. What’s the overarching theme of Job? Undue suffering and a God that remains quiet for most of the ride.

Job didn’t give me much respite from my pain. What was I, a teenager who had spent his life dedicate to God, supposed to do with this suffering? If God loves us, if he really is all-powerful and all-knowing, then why do bad things happen? Why do some babies die? Why is there poverty? Why cancer? Why natural disasters, racism, genocide? And, at least for me, why childhood sexual abuse?

As the years passed between me and the worst nights of my life, I found an alarming truth: just because you’ve forgotten, doesn’t mean you’re healed.

Decades after the abuse, I wasn’t able to enjoy sex with my new wife because every intimate act took me back to times of destruction. I had crippling fear around having kids—would I be able to protect them when I wasn’t able to protect myself? Because my abuser was a male, would I ever be able to have close, meaningful relationships with guys again?

My first significant step toward healing was opening my trap. Seriously. My wife was the first person to know. It brought a lot of confusion around our relationship into clarity. And her openness, genuineness, and empathy overwhelmed me. For the first time in a long time, I felt known. Loved. Protected. She gave me a safe place and space to heal. In time, with her help, I managed to tell other people who needed to know, including my parents and a handful of close friends. The more I spoke about it, the more I felt the grip of that abuse lessen. It wasn’t a secret anymore, and as such, it didn’t control me.

I found overwhelming freedom in admitting what had happened to me. But it didn’t answer the deeper question: why? There was only one place to find that answer.

In the Bible, there is a story of a woman named Hannah. Though married for many years, she was unable to conceive. To complicate matters, she was married to a man who had more than one wife. The other wife conceived children in abundance and never failed to throw it in Hannah’s face. Year after year, Hannah remained barren. On a trip to the temple, the Bible records her story in stunning honesty:

Though she was resentful, she prayed to the Lord while she cried.

I don’t believe that God expects us to accept the brokenness that happens to us. I don’t believe the lesson is learning to live despite tragedy, to walk away from the fight with a limp but grateful to be alive. Hannah used her resentment to drive her to the only place she could find an answer. And I fully believe God was pleased, even honored, with that resentful prayer. Why? Because it was honest.

In the spirit of Hannah, I dared to ask God where he was on the worst night of my life. He didn’t owe me an answer. He really didn’t. This isn’t about justice for me. It isn’t about achieving some nirvana-like understanding of suffering and suddenly being okay with it. I do not accept the idea that sexual abuse was part of God’s narrative for my life. I’ll be so bold as to say it wasn’t in his plan. I believe earth is a war zone, the setting for a battle so cosmic in scope and nature it puts anything Marvel has to offer to shame. It’s where right and wrong, good and bad, God and Satan throw punches. The abuse that happened to me was Satan looking to land a death blow, the collateral damage of war.

That summer night, when I laced up my Asics and hit the concrete, I’d already been asking God my question for a few weeks. He hadn’t answered me yet, but I decided to bring it back up again. I was just about to finish my run when an image took over my thoughts. I may have been running the rolling hills of central Kentucky, but all my senses were back there—in my bedroom at my parents’ house.

It was that night, and I was there as a fly on the wall, viewing these heart wrenching events as an outsider. The night was still. The room was dark. The abuse had already taken place. I saw my adolescent self, lying awake, trying to understand what had happened to me. And as my eyes adjusted to the dark scene, I saw a figure cowering over me. In his presence was fear, confusion, and a lifetime of brokeness. From his hand extended a fearsome claw. It was raised above me, as a scorpion would raise its stinger. He was preparing to deal a death strike. I could feel it. If he landed this blow, healing would never find me; hurt would perpetuate across generations. I watched my teenage self, lying in bed, unaware of the hurt about to befall it. Without warning, at lightning speed, the clawed hand moved to strike. I winced, preparing for the pain.

As quickly as his arm moved, it stopped. A hand caught his by the wrist. And like a child breaking sticks, I heard a horrific noise. With a snap, his arm was broken at the wrist. His clawed hand hung limp. Horror filled his face. He was as surprised as I was. And then he was gone.

It was Jesus. He had caught the claw as it moved to strike. And he broke it completely.

My physical self, overwhelmed with fatigue from the run and surprised at an answered prayer, doubled over.

I was staring at my feet, gasping for air. My vision continued. I saw Jesus helping my teenage self get out of bed. He didn’t say a thing. But he opened his arms. I fell into them. We both cried. And it was over.

The rest of the run was a blur. Somehow I made it back to the house and immediately set myself to finding some paper. I needed to draw what I’d seen. In a pinch, I settled for an old cardboard box and a black sharpie.

That was two years ago. I’m still overwhelmed that God answered my question. Where was he on the worst night of my life? Right beside me. He hurt with me, and had protected me more than I could ever know.

I still don’t know why we suffer. But I do know this: we don’t suffer alone. And, somehow, knowing that means more to me than an answer to the first question.

This is dangerous thing to write, but I’m going to anyway. If you’re dealing with the ramifications of past hurt, I’d encourage you to do two things. (1) Find someone safe to talk to. If you are suffering, don’t do it in silence. (2) Ask God where he was (or is) in your pain.

I believe God will answer you. Although, I’d say it’s pretty unlikely it will be the same way he answered me. Why? Because I believe God has something more in store for you. Just for you. Specifically for you. And I believe he will answer you in a way that will leave you feeling honored, chosen, and known. Why hasn’t he answered you yet? Maybe, just maybe, it’s because he’s waiting for you to ask. 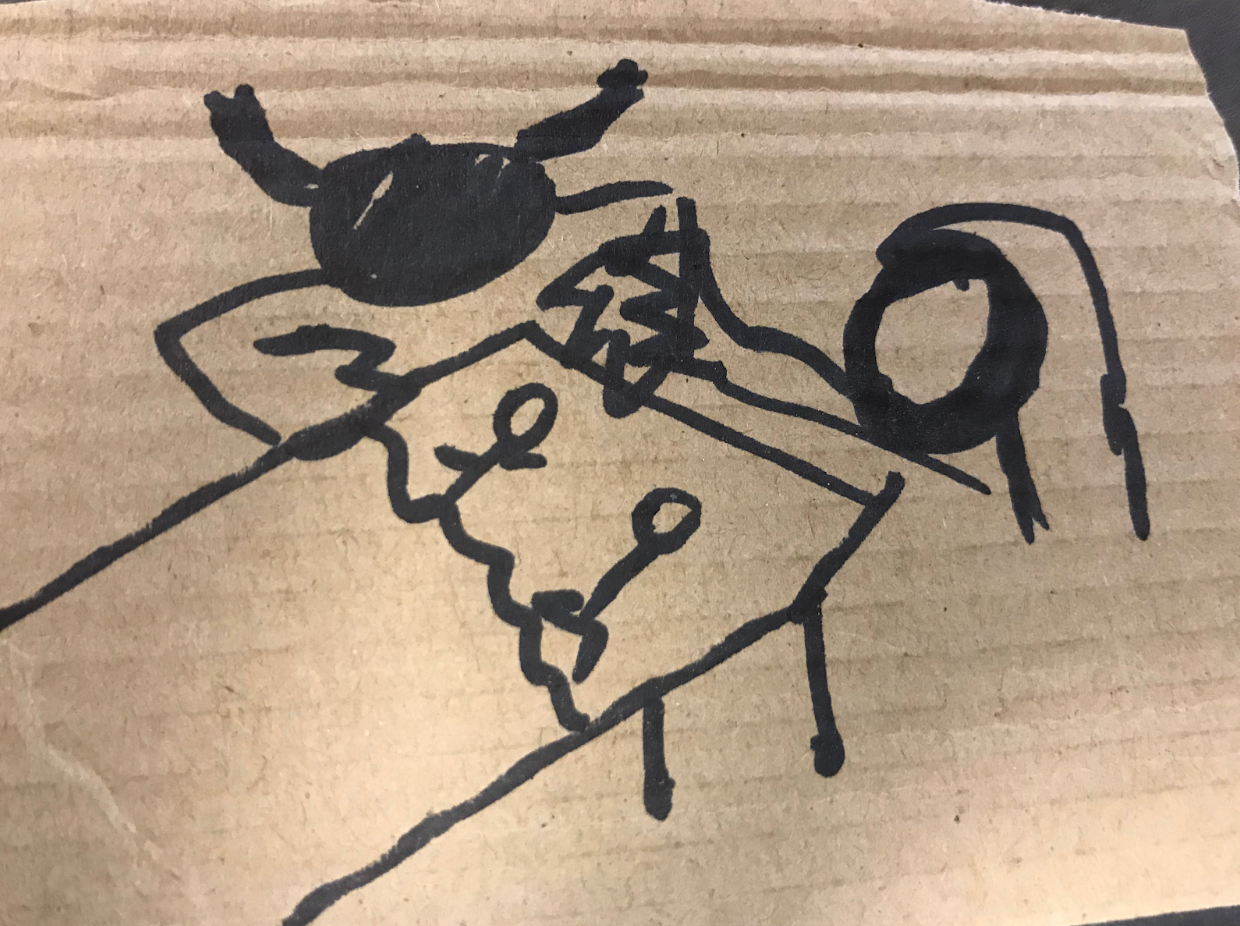 Dad of three, husband of one, pastor at Crossroads, and at the moment would rather be reading Tolkien, watching British TV, or in a pub with a pint of Guinness.

What Question Are You Asking? | The Book Of Luke Week 3