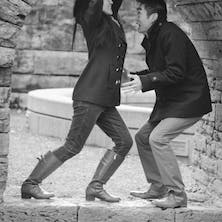 Growing up my parents taught me the value of working hard. If I was not able to achieve something, it was because I didn’t do enough.

My dad grew up in China in a time where there were no opportunities to improve his social status. He eventually immigrated to the U.S. and landed in the restaurant business. My parents, their friends, and coworkers struggled with handling money, particularly gambling. I quickly realized that money had power, and since I didn’t want money to have power over me, I decided early on that I was going to make and save as much money as possible.

I worked 3 jobs in college and decided to go to school for accounting because it would be a steady profession where I would always be able to make good money. After college, I moved to Cincinnati for a job in retail where I’d have a chance to climb the corporate ladder and make a name (and more money) for myself.

I started attending church because I heard that’s where you meet good girls. That same year, I got baptized. While I was still working to be successful in the eyes of my parents, now I also felt I should be working for God’s approval. I was negotiating with Him every time I made a mistake and the illusion of success was controlling my life. Whether it was what I wore, the car I drove, the girl I was with, or how much money I had, I was constantly comparing to what other people had. I felt guilty and shameful about that.

After 3 years of negotiating with God, I reached a breaking point. I could no longer keep up the facade. That’s when I truly prayed for the first time. I began reflecting on the creation story and realized that I needed a helper to live the life God wanted for me. About a month later, a friend set me up on a blind date with her friend Jen. Aside from being the only Asian friends she had, we were not a “match” on paper: she loved reading books, I loved playing video games; she hated sweating, I loved staying active. God has a sense of humor, that’s for sure.

Jen taught me about the concept of tithing – giving the first 10% of what we earn to God. After working as a server for many years, I equated 10% to a lousy tip. Was that really all God was asking for? I started tithing and soon after started giving beyond 10% of my income. It would be years later that we realized the amount that I gave for the first time was our wedding date!

Once we were married, we continued to tithe. It became less about obligation and more about loosening my grip on money. My heart was changing. In our first year of marriage, when I was on the precipice of a promotion in my retail job and Jen was working full-time, we made a large financial commitment to Crossroads: our entire savings + Jen’s income for the next 3 years.

Within that next year we found out we were pregnant with our first child and bought our first home. God also took me on a journey that led to leaving my retail job without having another job lined up. He gave me the option of a predictable life of climbing the corporate ladder or a life of adventure with Him where he has full control of the direction of our family.

That adventure has grown our family – we welcomed our 4th child in 2020. We bought another house and used the equity from selling our first home to allow Jen to stay home with our kids for several years. On paper, our finances and our life circumstances don’t line up; according to our school system, we’re living in poverty. But everything in our life feels really abundant, fruitful, and countercultural.

We teach our kids that nothing they have is their own but all of it is given out of God’s abundance for us to manage and steward well. There is so much freedom that has come from the way we live and God has provided things in His own way at the perfect time. For example, when I traded in my sports car and purchased our first family car, we received a random check as a gift from a family member in the mail for the exact amount we had paid. We can list paragraphs of ways that God has provided for us.

We have a budget, but we don’t live to uphold our budget. The budget exists to help us. In the same way, God set up the tithe as a way to bless us because He knows what money can do to us. There is freedom that comes when we let it go and give it back to Him. -Vince L.