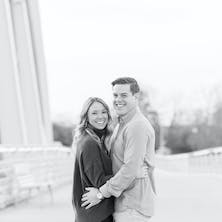 From small groups to a pandemic wedding, God has been guiding all the way

When we first met, Tom was dealing with a lot of stuff in his life that was going wrong – his parents were getting divorced, he was working on his career, and he remained very focused on having fun and not much else. He grew up Catholic but since college had started turning away from God. Right away Jenna started inviting him to Crossroads, but it didn’t happen for a while.

Jenna had been attending Crossroads with her mom for years. It was their regular weekly routine to sit in the front of the auditorium at service on Saturday night and head to dinner but never really stepped into anything beyond that.

Meanwhile, a doctor who Tom worked with started telling him about his Crossroads experience. Through the lens of his Catholic background, he had made the conclusion that Crossroads wasn’t really church but something fun that made people feel better about how they spent their time and money. Still, at some point, he decided to give it a try. He was unsure at first and a little overwhelmed the first time through the doors, but eventually it became normal and awesome.

Around this time Jenna decided she wanted to take a next step in her involvement at Crossroads. She signed up for GO South Africa and while there was asked to pray over a community where the team was serving. She had never prayed out loud and felt like she wasn’t great at wording her prayers. As she started praying, she lost it. She was weeping with a type of crying that almost felt like a cleansing and someone else from the group had to finish the prayer. The experience kind of scared her and she went back to her normal routine attending church with Tom when she returned to Cincinnati.

Eventually, we started attending a small group together. We engaged with a few people we knew from a mission trip Tom went on, which made it less intimidating, but we definitely were learning to navigate how to share and what to share in a small group atmosphere. The more we engaged and got comfortable, the better it got.

After that, Tom’s job relocated him to Columbus and Jenna made the move as well. We were a little nervous because we had been on such a good track and the community was small, meeting in a movie theater without a leader. Luckily, we connected with the people right away and when Vicki came on as community pastor she brought more organization and we became friends. We often went back to Cincinnati to visit for the weekend but always found ourselves getting up early on Sunday morning to make it back to Columbus in time to serve. We joined the Crossroads Columbus leadership team, started leading the welcome team, and even started leading small groups of our own. It was something we never envisioned! It was a combination of growing closer to God through our friends in Cincinnati and then Vicki and our friends in Columbus. Someone was always pushing us and leading us to the next right choice and we just started inviting everyone we knew to come and experience our church with us.

Fast forward a bit and we were set to get married at Norris Lake in the summer of 2020. It was challenging to make plans for the people we loved to be there on our wedding day, but after dating for five years we didn’t want to wait another minute to make things official in God’s eyes. Vicki and most of our friends and family were able to join us and celebrate that moment in the midst of all of the craziness happening in the world. Then, the next morning, we both got baptized in the lake. It was the perfect way to start our marriage together surrounded by people we loved who could celebrate both commitments with us.

Now we’re preparing to welcome a baby in the fall and excited to see what God has next for our family and for the Crossroads Columbus community that we love. -Tom and Jenna W.