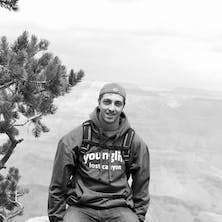 Two years after we were married, my wife’s cancer returned for the third time. After six months of treatment followed by six months of remission, we received the worst phone call. The cancer was back and much different than before. Just six months later, she passed away. Everything I thought life was supposed to be about was taken away and gone. What I thought was my future was gone, and it left me in a position of asking what now and what next. I wrestled with the Lord about what to do and where to go.

Before Jenna died, she made me promise that I wouldn’t stop following Jesus. And while I agreed, I didn’t realize until recently that she meant not just believing, but really following Him with whole-hearted commitment.

When Jenna was sick, we fully believed that her story would be used to bring people to Jesus. In our minds she would have a miraculous recovery that would show everyone who knew her how great and miraculous our God is. We faithfully believed that Jesus would heal her. When you take a look at Jesus, He was always healing his followers in scripture, and I wrestled with that after Jenna’s death. As I look back (while still really difficult), I can begin to see how Jenna’s story was formed to glorify God. And while we were hoping for a miracle, it’s important to remember that it’s a miracle because they rarely happen. As I dove into scripture of Jesus healing people, I realized that the same people Jesus healed still got sick again and died. It wasn’t about physical healing, it was about their hearts.

We had this whole narrative built, but on the other side of things if there was something that would’ve had bigger reach, Jenna would’ve chosen that – it turns out, that’s what happened. I started reading Jenna’s journals from her last few years and felt called to tell her story. I compiled them, prayers, and stories from friends and combined them to tell her story through a published book. I’ve been sharing her story with thousands of people through the book – TV appearances, speaking at conferences and other events. It has been an opportunity to share with people that God is good even when miracles don’t come.

I’ve faced some of the most difficult days, and while I know there are more difficult ones to come, there is life on the other side. I don’t think I’ll ever get over it; it will always be with me. And as I interact with others who are struggling with different things (whether small or large), I have to remember that everybody’s battle is different.

By reflecting on Jenna’s attitude and perseverance, I learned several ways to help me get through the tough moments: I’ve surrounded myself with people who are willing to live life with me and provide encouragement and wisdom when things get difficult. I focus on the small details and God showing up in the small things – like Jenna’s favorite TV show doing an excellent reunion episode that happened to fall on her birthday – to help me reorient. I find ways to serve others that help me shift from “woe is me” to loving people. In the moments when I’m grieving, I do projects around the house that I know Jenna would’ve loved.

Shifting my focus from myself and the now to realizing how short life is and living for eternity has changed everything. I can choose to focus on the things that are bad now, the way I wanted life to be, the future that I’ve lost and it would destroy me. Or I can choose a mindset that acknowledges that while things may not be the way I hoped, it’s not all about me and that my hope and future can be found in the Lord’s promises and His goodness. -Scott H.