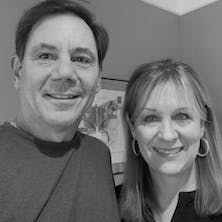 Our daughter Stephanie passed away in March after an ongoing battle with an eating disorder and mental illness. We got to do a family-only viewing at the funeral home on that Friday and by Monday everything shut down. Our tragedy was happening parallel with the world’s tragedy.

We’ve always had faith, but in this time we’ve learned to pray differently and spent more time in the Bible. While the world was shut down due to Covid, we really didn’t know much about what was going on because we were focused on being immersed in Bible study and trying to find scripture to help us with the grief we were going through. We never really understood the word lament before, but now we’re learning that God wants us to do that and to heal us and be by our side. We began participating in the daily live Facebook worship sessions and taking daily walks while listening to worship music and finding comfort in hearing God is a waymaker and protector and healer. We believe that God protected Stephanie for a number of years but in the end this was the only way He could heal her.

Through it all, we’ve been surrounded by community. Both of our small groups had previously been planning to meet the Monday that Stephanie passed, and they all came to our house to pray with us after they heard the news. That was the beginning of the hidden treasures we’ve been given as God continues putting people in front of us and verses in front of us. In many ways His presence is coming through to help us in this season. We got connected with a grief group at Crossroads that has provided support and people who are willing to listen and understand what we’re experiencing. Individual team members at Crossroads also came alongside both of us and our daughter Alyssa as we began to process our loss. We became very close with Greg McElfresh during the months of March through July as he spiritually and compassionately supported us leading up to Stephanie’s celebration of life that he performed when we were able to hold it, and it was an honor for our family to have Greg then marry Alyssa and our new son-in-law Robert. We’ve been part of the Crossroads community for years, but it has never felt more personal.

In the past we may have been skeptical of people who talked about receiving signs of loved ones who were no longer with them, but we have seen that in the past few months, whether it was butterflies and cardinals finding their way to us or a star glimmering in the sky. They have been God-given treasures. In October, at Alyssa’s wedding, just before the bridal party walked in, it rained for 10 seconds and then a large butterfly (Stephanie’s favorite) flew through the courtyard. Those were unbelievable signs from God that Stephanie was with us and crying tears of joy for her sister.

Some days we feel really strong and some days we don’t. We still go through the guilt and shame and what if questions about the last few weeks of Stephanie’s life and why this happened when it did. Stephanie struggled so much, and she gave it her best but we believe that God rescued her. As hard as it is to lose her, we know she’s in a better place and we will see her again. We don’t say that lightly because it’s what you’re supposed to say, but we truly believe that in our heart and soul. That’s what keeps us moving forward. -Mike and Nancy L.