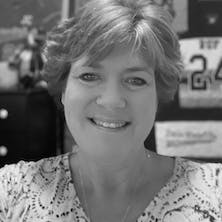 Community was key after I lost my son to suicide

I didn’t grow up in church. I attended on occasion in adulthood but never felt like I was good enough to check all of the boxes to make it worth it. When Crossroads Florence opened, a friend invited me and promised that if nothing else I would love the music. I decided to bring my two teenage boys and go to church with her. That weekend the message was focused on fathers and it opened up conversations with my boys about my dad and their dad and I immediately felt connected to this place.

For the first couple of years that I was attending, I only volunteered for special events. I didn’t want to get connected to people because I’m a people person and wanted to be there for the right spiritual reason. Eventually, I decided to join the welcome team which led to an invitation to a small group. That’s when everything really changed. I started to dig into the Bible and learn more and my group provided a whole new understanding of having a relationship of connection and understanding with God rather than an understanding based on fear.

Then, in 2016, my 16-year-old son JC died by suicide. It happened while I was at Bible study, and I came home to find him. I was so angry at God and raged at Him asking why He didn’t intervene, but when I calmed down, I heard Him telling me it wasn’t about me and that He was taking care of me and understood my pain because His own son had asked not to suffer but He had to let Him endure suffering as well to save me. He surrounded me with the Crossroads community. My small group was at my house praying and they came to serve food after JC’s funeral. The team who helped plan the funeral was there for me before I had even gotten to a point of figuring that step out. I don’t know how I would’ve survived if I had not found Crossroads, found God, and been a part of my small group. It was just complete support from all sides.

With JC gone and my other son away at college, I instantly became an empty nester. I had been a sports mom and now I didn’t have any sports to attend, so who was I? What was I supposed to do now? I didn’t have money to donate to every worthy cause, but I had time that I could donate, so I started serving. It didn’t make any sense at the time, but one day I woke up and I just felt like I was supposed to start serving in the Four-Seven Prison Ministry. I had no personal connection to it and had to drive an hour and a half to get there after a long day of work, but I clearly felt like it was what I was supposed to do. Through that so much healing came from being honest and openly sharing my story and JC’s story and getting connected to people who have suffered loss through suicide. Now it has become part of my journey to be available to someone who lost a loved one to suicide or lost a child. God has used my pain to help others.

I often hear God most clearly in the mornings. Similar to the way I felt God call me into prison ministry, I felt Him call me to go to Nicaragua to meet my Compassion child. While I was there, I spent many mornings watching the sun rise over a volcano from a balcony where we stayed. I sat there, just me, God, and my journal, and had some time to work through feelings I had been running from. Before that trip I had found a piece of artwork that JC had made in third grade of a butterfly made from my hand and his hand that said, ‘Butterfly, butterfly to my mother, butterfly, butterfly, tell her I love her.’ During that trip we hiked up a volcano, and when we got to the top a butterfly landed on me and just stayed for the longest time. Then, when I met the child I sponsor, he gave me a bouquet he had made out of paper and foam that was covered in red paper butterflies. It was amazing.

I had been baptized at Florence several months after JC passed, and I know it was 99% for the right reason but partly just to prove to God that I knew He was the only one getting me through it. When I was in Nicaragua, I renewed my baptism in a kiddie pool to show that I was 100% in love with God and after that I felt so open and free.

Since then God has challenged me in other ways. During Covid I was unable to volunteer in the usual ways, was forced to work from home, and I live alone. He used that quiet space to help me work through more things. For Mother’s Day, my son and I cleaned out JC’s bedroom and turned it into my home office, which was a growth experience. I also felt God prompt me to start a journey group to provide a place for my friend to join. That group is ongoing and we even recently took a weekend trip together.

I still have my ‘non-church conversations with God’ where I might throw a tantrum or work through something, but I know that He has me and is guiding me. -Karen R.