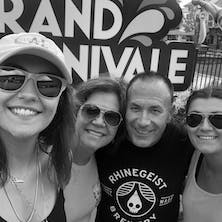 When our daughter was murdered our community showed up

Our daughter Katherine was murdered in the fall of 2019, and the community of people that we met through Crossroads has made all the difference at this tragic time of our life.

We started attending Crossroads Oakley in 2011 and we were part of the West Side launch. Right after West Side opened, we got connected with a small group of couples that we’re still part of today. We’ve gone on trips together, quarantined together during Covid, and just have been active in one another’s lives and the lives of our families. So when this happened, they were right by our sides.

Katherine had been struggling for a while and we had been worrying about her. John was serving with the production team one weekend and during a meeting before service shared what was going on. That team of about 15 surrounded him and prayed for him and for our family. It provided a moment of love and calming and was a beautiful picture of how our community is here for each other. Grace’s Women in the Word group did the same – 12 women all laid hands on her and prayed, surrounding her with a hedge of protection and love.

Shortly after that, John had to go out of town for work. Grace was at home and our other daughter, Angie, was at school in Louisville when one morning Grace heard through social media that something had happened to Katherine. She let John know, and he prepared to leave immediately to make the five-hour drive back to Cincinnati, but the executives from his company stopped him and instead sent its private plane to pick him up and bring him home.

Meanwhile, Grace called our close friends from our Crossroads community who dropped everything and came to our house immediately. Other members of our small group also started arriving, and the men in the group argued about which five of them were going to ride in the car to meet John at the airport when he landed. We were separate when it happened, but God showed up and blessed us in separate ways through the people who were with us. It’s hard to imagine a better picture of love than those burly men embracing John on the tarmac.

A few days later, after the police had finished their investigation in Katherine’s apartment where she had been killed, those same friends went inside to clean it out for us. They didn’t want us to have to see it. They brought out all of Katherine’s belongings and placed them neatly in a truck as if they were moving someone into a new house. One family took all of Katherine’s clothes, washed them, and returned them to us neatly folded in baskets. When they say God helps heal the brokenhearted, we experienced that in God sending in people to rescue us.

Katherine’s memorial service was on a beautiful Sunday in October at Crossroads West Side. The video team worked with Angie to put together a compilation of photos of Katherine, and every member of West Side staff was there along with our small groups to help with an amazing reception during time they could have been spending with their families. Brad, our worship leader, hadn’t planned to be there because it was his wife’s birthday, so we were shocked to see him in the atrium before the service. When we asked what he was doing there, he said he had called his wife and told her what was happening and she told him to stay. We were completely blown away. Matt, who had met Katherine only once, had come to our house in the days ahead of the service to talk with us and gave the most beautiful eulogy that captured her spirit. Everything about that day was so perfect because of the love people had for us, and that has continued.

God’s hand has clearly been in this situation through that community and even in witnesses and evidence and the police involved in Katherine’s case. The two lead detectives in the case were just so compassionate and hardworking, and one of them has told us that we helped change her life through our interactions with her. We know it’s because of our faith. Katherine was very beloved and had a lot of friends, so they made tons of calls to track down any information they could find. There were people who could have been incriminating themselves in other ways by providing their phones to them, but they did it for Katherine, and the detectives said they had never seen that kind of love for someone before. Even the probate officer who Grace met with to take care of some of Katherine’s belongings was incredibly sweet and shared about losing her own son. After an arrest was made in Katherine’s case, she sent us a card.

We know that God brings good out of even the worst situations and we’ve seen that. One of the key witnesses in the case who was friends with Katherine called us several months ago to tell us that he had checked into rehab and is healthy now because Katherine had been asking him to do so and he did it in her memory. We had been worried about some of her friends and if they might go off the deep end after this happened, but everyone is healthy, so maybe this helped make a difference in the lives of some of those people who needed to change some things. And we don’t know how many people got to hear the message of Jesus at Katherine’s memorial who needed it, but we know at least two to three who were changed by it, which makes us know this was not in vain. We’re using our experience to minister to others and we’re not letting a criminal steal our joy. We’re focused on our faith and the hope we have as a result, and we expect even more good things are to come. -John and Grace L.