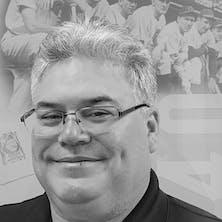 I became an ironworker 24 years ago, and early in my career I was working on the Kids’ Club addition at Crossroads Oakley. Everybody came out and was signing the beams. I didn’t know why they were doing it, but I decided to go up and sign my name along with a little blessing for my boss since it was a church. I had no idea what the meaning of it was.

I had grown up Catholic but turned away from my faith early on. One day two years ago I was in my office talking to one of the contractors who hires ironworkers and he told me about how he goes to Crossroads. I told him I had always wanted to go check it out but didn’t want to walk into church alone. He told me he would meet me there that weekend and I’ve been coming back ever since.

My son told me last year that for his 11th birthday he wanted to be baptized, and the final baptism service before the buildings closed for Covid fell exactly on his birthday. That just blew me away.

I’ve been volunteering on the experience team for a few months now, and when we were doing the 25th anniversary celebration and I heard Brian talk about signing the beams, I teared up. God knew 20 years ago that I was signing myself up for something that I didn’t even know about. I can’t say enough about what Crossroads has done for me over the past two years and how helpful it has been to have God back in my life as I deal with the stress of my job. It was pretty cool that I got to put the names of my family and a close friend on that beam this weekend and I hope that one day I get to tell them the story of their names being on the beams too. __-Dave B. __