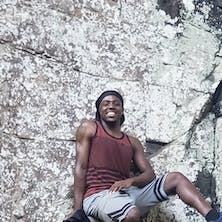 God got my attention with an accident I shouldn't have survived

Last year I was in a very bad place in my life with handling adversity at college while facing depression and anxiety. It stemmed from decisions I made at a young age trying to push God away when I decided I didn’t believe in Him. Still, I would yell at Him out of anger.

One night I hit a breaking point. I blacked out before I started driving and went to a remote part of town where I had never been. I crashed my car and went flying through the windshield. The only thing I remember is walking to a curb and bright lights coming toward me. Typically no one would’ve been in that area at night, but someone said they heard a crash, drove their car over to where I was, and called 911.

It’s truly a mystery how I survived the accident because I flew out of the windshield, hit a rock and cracked my skull while my car was still flipping. The accident was about 100 feet from where I walked to the curb but there was no blood trail even though I was bleeding head to toe.

In the hospital, I felt a weight off of my shoulders and feeling of light inside of me as I began to let go and let God into my life. I started to understand and go to God more instead of looking at things with anger and confusion. The things I previously thought He was doing that were bad were great in the long run and for my good. Even when I thought He left me or didn’t care, He saved me from all the anger and hate I showed Him. He saved me at my breaking point. I felt great fulfillment and relief.

A month after the accident, I began reading the Bible every day and started to get the feeling that I wanted to be baptized. I still had an open wound from losing my ear in the accident, so it was a bad idea to be submerged in water yet. Then, Covid hit and churches weren’t doing baptisms. Eventually, my girlfriend (who I met because of the accident) told me about how Crossroads was doing baptisms in the Ohio River. At first it seemed gross, and then I realized if God was in it I would be OK. I went to Worship at the Cove and was baptized in the river. I felt such a release and the people who baptized me said I even got taller.

Now I hear God more and I’m really paying attention. I use my Bible app everyday. I stopped using social media because it was playing a part in my depression and anxiety as I was comparing others’ successful lives to my life and where I wanted to be. I’ve stopped cussing - which I used to do a lot - and I’m fasting the first week of every month. I’m listening to my body and what I want to do for God including writing Gospel rap and hip hop music. I’m changing and going with the flow and not being so stressed about what’s next and how I’m supposed to do it while living and enjoying life. I know that God has me.__ -Caleb E.__