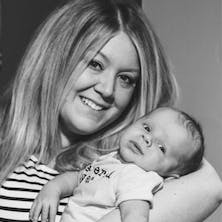 We prayed for a baby for months and God performed miracles

After we had been trying to conceive for a year, I learned that my previous diagnosis of PCOS wasn’t accurate and that in fact I had a very low egg count. At 30 years old my count was more in line with a 40-50 year old woman. We were told that there was an 8% chance that we would have a biological child even with IVF.

Hearing that diagnosis made me incredibly depressed. I called off work for a few days and went into a black hole. I couldn’t leave the couch, couldn’t eat, couldn’t drink. I was in a dark place. That weekend, a few weeks before Easter, I decided to go back to Crossroads for the first time after the pandemic with my mom. I almost didn’t go because I told her I didn’t think I could leave the house without crying. We sat in the back because I was afraid of crying in front of people. The teaching that week was about Moses parting the Red Sea. I remember thinking that I had heard this story every year around Easter since I had grown up in Catholic school, but it never really resonated with me. This time I saw it differently. If God could do big miracles like that, let’s pray about this and see what He does. This is much smaller than parting a sea.

After service, my mom said she was going to get some creamer for her coffee, which I thought was weird because she never uses creamer, but when she went to the coffee station she met a staff member and asked her if there were any support groups at Crossroads for infertility. She said there weren’t any current groups but hoped they would restart because she had experienced infertility as well. When I heard that, I perked up because I knew she understood. She asked if she could pray for me and placed her hands on my belly. As she prayed, she asked God to heal what was broken within me. I cried through the whole prayer and felt a physical warmth where she had placed her hand. I felt like things were going to be OK.

After that day, my anxiety has almost disappeared. I decided I would do my best to make God proud of me. I ate healthy, became fully present, and started talking to God and worshiping by singing whenever I could. My husband and I prayed every night as we awaited fertility treatment. I started talking to God while I was on my way to work each day, and we were back in the rhythm of going to church again. I thought maybe the whole thing was meant just to bring me closer to God. Then, I was praying on the way home from work one day and clearly heard the words “I’m not done.”

I had been tracking my ovulation but hadn’t had a period in at least a year. That week, I got my first-ever confirmation that I was ovulating. My fertility doctor didn’t believe it and said there was no way that was happening, but we decided to try anyway. A few weeks later, I woke up at 5am and had a feeling that I should take a pregnancy test. As I waited for the result, I got down on my knees on the bathroom floor and told God that if He gave me this I would tell everyone about it and not leave him out of the story. I was shocked when I saw two lines on that test. I just sat there.

I made a cute box to tell my husband he was going to be a dad, and he said, “they told us we needed treatment.” My doctor didn’t believe it could be true either and sent me to my OBGYN to confirm my hormone levels and do an ultrasound. When my pregnancy was confirmed, the ultrasound showed that the way my uterus was shaped could limit the likelihood of a viable pregnancy. I was devastated because it felt like a good thing happened and now it might not actually be possible. I asked so many people to pray for me and the next time I had an ultrasound, they couldn’t even find evidence of what had been noted before. Things like that continued throughout my pregnancy. There were a few times that the baby’s measurements were a little off or things seemed worrisome, but all of a sudden I would feel a sense of calm. After nine months, we were overjoyed to welcome our baby boy!

I had very high anxiety, and even now that my son is here, it doesn’t impact me nearly as much as it used to. Newborns do crazy things and if they sneeze funny, you think you need to Google what’s wrong, and sometimes in a weak moment I still do, but now I always just think, “God’s got this.” It has changed my prayer life because growing up I always thought my prayers had to be structured, but now I pray while I’m driving or cooking or whatever I’m doing. And I always tell everyone about how prayer made our baby possible. And if he can do that for me, imagine what he can do for you! - Aly S.