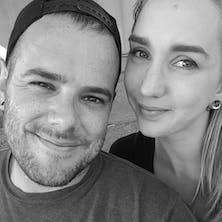 God was doing somersaults to get our attention

Aaron was raised Catholic and I was raised Baptist, but I had pretty much given up on religion. Around the time that we were pregnant with our second child, I considered myself agnostic and Aaron started feeling like he wanted to move away from Catholicism because he had also lost his faith amidst a lot of what had happened in his life.

During the pandemic, Aaron was talking to one of his coworkers in emergency healthcare because they were dealing with the difficult impact of Covid every day. His friend Kyle told him that he attended Crossroads and invited us to Worship at the Cove. I told Aaron even though I wasn’t religious that we could give it a try and I’d go with an open mind.

The Cove was nice, and when Crossroads buildings reopened we decided to go to East Side. Every weekend when we came, the message was spot on with something we had just been discussing. One week during our drive to church we were talking about planning for the summer and in that week’s message Brian talked about what the Bible says about planning. One week I went by myself and we sang a song that I already knew. Just every time we went to church it directly applied to what we were talking about or thinking about.

We started having conversations at dinner about the Bible and God. Before I was even sure if I believed in God, we prayed as we sat trapped in an hours-long traffic jam that we could make it to an important doctor’s appointment on time. Just as we finished praying, traffic began moving and we made it. We prayed for a baby girl and found out that we were indeed having a girl. There were so many coincidences happening that they couldn’t be coincidences anymore. I felt like I was standing on a ledge and I heard not my own voice but a voice in my attitude say, ‘What’s the worst that’s going to happen? Take this journey and I’m here for you.’

Eventually I met with Lena and she answered so many of my questions. I told her, ‘I feel like God is doing somersaults in front of me trying to get my attention.’ After we talked, I made the decision to get baptized.

Soon after my baptism our family moved to Florida. We visited another church and quickly realized that we can’t find anything else that compares to Crossroads. We’re hoping to get connected to some people in our area who are part of Crossroads and to build our own community here because Crossroads just feels so inviting and like one big family. -Megan and Aaron R.