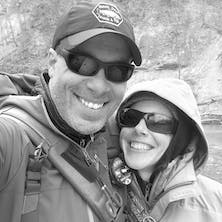 God brought our broken families together and fulfilled a lifelong dream

“I was an altar boy and had a positive upbringing in the church. I have had my ups and downs and times where I fell out of practice with God but never gave up. One of the more significant downs happened in 2015. My wife Darcy had an eating disorder. Due to this illness, she never wanted kids. I was disappointed but supportive. She fell gravely ill due to complications with the disorder. She was on life support and ultimately needed a liver transplant. However, she was not eligible until she recovered from her eating disorder. She began to receive treatment and became much healthier. By what we felt was a miracle, she no longer needed a liver transplant. She continued with outpatient treatment. We were hopeful for a new start to our lives. However, shortly after her recovery, Darcy was involved in a seemingly minor traffic accident. About two weeks later, she collapsed due to complications from the accident. She passed away in February 2016, surrounded by family. At that moment, I felt all of her/our pain disappear, and the Lord’s grace replaced it as she was called home. I shed tears of joy, knowing that Darcy was now at peace and was free from the chains of bondage that had plagued her earthly life. This was the first time I truly felt the grace of God.

Two weeks after she passed away, I was invited to Man Camp by my chiropractor. God prompted him to not only invite me but pay my way. Man Camp was just what I needed. God was speaking through me to minister to other people’s problems at Man Camp instead of me needing all the attention. Many of the men were surprised at how well I was coping with my wife’s death. This was because Father God had me during this tragic time, and I relied on Him heavily to cope. I felt that God was using me to show others what His love can really do in life.

Later that year, I met Christine. She was agnostic and was divorced with two kids. Christine had grown up with religious education, but a relationship with God was not something that was discussed at home. She decided to leave the church due to man’s manipulation of religion and a lack of connection. After years of exploration, she felt that there was something else out there, even though she did not know what it was.”

“That’s right. I knew there was a missing piece. I just didn’t know what that was at the time. When we started to date, we talked a lot about Jesus and His love. We happened to drive by Crossroads Oakley when the Superbowl of Preaching was going on and decided to check it out. We continued to attend services at Crossroads, and as I did, it felt like I began to understand who Jesus was minus all of the religion that had pushed me away. We got married in 2017 and became a family. We now know that God brought us together. The path to us joining as a family was natural and uplifting. I am blessed to see my boys have a father they adore, a father who is strong in his faith and conviction and who makes sure that all praise and honor go to Father God.

I encouraged Manuel to quit his job in IT to pursue his calling of being a fly-fishing guide. I joined his business Black Jaw Tackle and helped it grow. Our goal is to inspire people to discover the joy of being outdoors and on the water while being present in the moment. We want people to come out and enjoy God’s beauty and nature and disconnect from technology. Our bodies were not meant to be still. Being guides is not only our passion. It is what God has called us to do. Our mission is to bring people out to enjoy nature and to slow down enough to hear from God.” -Manuel and Christine G.