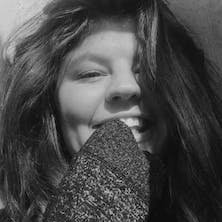 Procrastinating in college led me to Jesus

I grew up in a non-religious household. My parents never forced their opinions or beliefs on me. They just wanted me to be a good person. Once I graduated high school, I decided to go to Eastern Kentucky University. I joined the dance team but never felt close to anyone. We would only hang out in practices but never outside of that. I felt incredibly isolated and would not leave my room for days. Then one day, a girl I danced with asked me to move into her apartment next year. I knew that she was strong in her faith and went to Crossroads. That did not discourage me from moving in. Once we were roommates, she would invite me to come to church with her, but I never wanted to go. I still felt isolated and alone, I knew all these people and had amazing roommates, but I felt so empty.

One morning I got up and felt terrible. I did not want to even get out of bed, but I decided to go to the library and try to get all my homework done. I got to the library, sat down, and just stared at an empty document for 30 minutes. Completely out of the blue, I decided to pull up the Crossroads website. I can only describe that moment as a prompting from Jesus. I clicked on a random weekend video, and it skipped past the worship. Right where I stopped the video, Chuck Mingo said that ‘Jesus has 99 sheep and He will leave those 99 and come after you.’ I broke down and started bawling. I was so overwhelmed and felt so known and loved that Jesus would come after me.

I decided to start attending Crossroads Richmond with my roommate. I met so many new people and got more involved with the Crossroads community through serving with Student Ministry. I felt only a few steps ahead of students in my journey, which allowed me to connect more with them. I felt like I could relate with students who had never grown up in the church and were new to their faith. This helped me lead them to be in a relationship with Jesus.

I decided to get baptized and publicly declare that I had made a decision to follow Jesus. But at times, I felt so unworthy that the creator of the universe wanted to know me. I decided to go to Woman Camp on a complete whim, and I had no idea what to expect or what I would get out of the weekend. I arrived at the camp in the pouring down rain and I did not know anyone in my group. We broke into solitude time, and I began to write down my thoughts and feelings. We had to write out things we did not like about ourselves. I began to write down that I did not feel like I was good enough. I then felt God stopped me and said, ‘Why are you writing that down?’ And right after that, I had such an amazing thought then came over me: The God who created every star in the galaxy knew me and loved me. It was pouring down rain, and I felt that the rain was washing away all my bad thoughts and feelings of being unworthy. I have now been able to feel confident in God and how He thinks of me. I truly have found my worth in Him. -Kayla F.