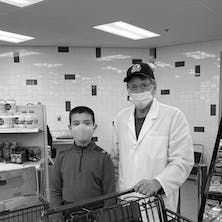 Our family spends a lot of time at Crossroads and sometimes I get bored, but some of my favorite times at church are when I get to volunteer to help other kids. Last year, I got to help people in a different way through Thanksgiving Food Drive.

It all started because I just like shopping, so I wanted to do the shopping for our box for Thanksgiving Food Drive. Then I realized that I wanted to do more stuff to help people who can’t afford Thanksgiving dinner, so when we were shopping for our box, I decided to make a little video going down the aisles telling people that if they couldn’t shop because of Covid that I would do it for them if they sent the money to us on Venmo.

It started pretty slow at first. I made a couple of videos and people sent some money, and then I set a goal of raising $1,000.

A few weeks later, my mom picked me up from school and asked if I wanted to be on the news to talk about Thanksgiving Food Drive with our community pastor. When we did that, I started getting money from strangers. Then a lot of people started sending money and telling their neighbors and friends. We were going to the grocery store almost every day after school and had to go to different places to have enough of everything. I liked packing the boxes and putting the stuff in the cart. We ended up with more frozen turkeys than we could keep at our house, so we had to keep them at someone else’s house for a while. Then a manager at one of the stores agreed to hold onto some of them until we were ready to pack the boxes.

I ended up needing to get a U-Haul to drop off all of the boxes! And more people dropped off food and money when we were collecting boxes at our Thanksgiving Food Drive box dropoff. I ended up being able to fill 40 boxes and donate $164 to Feeding America because of what everyone gave.

This year I’m making a couple videos and plan to do the same thing to collect hopefully even more boxes because I just want to make people happy who might not be able to afford a Thanksgiving meal. __-Jordan B. __