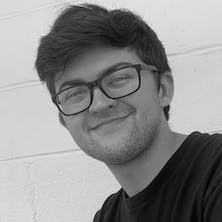 Before I started Rooted, one of my friends invited me to come back to church with her. I didn’t really want to go at first, but eventually I decided that I wanted to explore faith again and came to Crossroads with her. I immediately fell in love with Crossroads and I cried in my first service because it was just what I needed in that moment.

A while later, another friend invited me to be part of Rooted. I was hesitant at first because I was just getting into my faith and meeting new people and, honestly, I felt in some ways like I wasn’t worthy enough to be part of a group like that. Eventually, I decided to take a shot at it.

It was definitely hard at first to be vulnerable and open, but I still enjoyed it. It was refreshing to talk to people at all different places in their faith from our co-leaders who were very strong in their faith to me and a few others who were just starting out or starting again after a rough past to people who had grown stagnant in their faith. After two weeks, I felt like there was a really good flow of development of character and faith happening. By week three, I finally spoke without being called on and in that moment I felt more comfortable in myself and my faith moving forward. The questions and things you read really aren’t stereotypical but very deep and really challenge your faith and push you further. It leads to really good conversations and made myself and others in my group look at things from a different perspective. As Rooted continued, I got more connected to Crossroads and the people there. I was also pushed to be more faithful in things like reading my Bible everyday and focusing more on scripture.

Before the last week of Rooted I had been thinking about being baptized, and in that week there was an opportunity to say that you wanted to be baptized. It felt funny that I had already been thinking about it. It showed that this journey had changed me that much that I was already asking the question before the book prompted it. A few weeks later, I got baptized. Since then I’ve gotten even more involved with other things like helping to lead at College Camp and I’m planning to lead a Rooted group.

If someone is thinking about doing Rooted, I would say that it’s a great thing to do even just to build your community and meet people. I’m now close friends with several people from my group and I’ve gotten connected to literally hundreds of other people through the people in my group. It’s a great gateway into faith and community and a good life following Christ. __-Jacob B. __