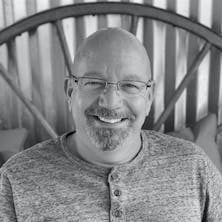 I found my fit while serving love during the holidays

As I was going through a separation and then divorce of my 24-year marriage last October, my kids invited me to come to church with them. They warned me that it would be loud and I might not like it, but the message that weekend hit me directly and from that point forward the messages were spot on for me at the time. When I started hearing about Thanksgiving Food Drive and that volunteers were needed, I decided I had the time and I should give it a shot, so I signed up.

On the morning of box dropoff, I showed up and it was phenomenal! There was such a welcoming group of people and we were given clear instructions, asked what we would like to do, and reminded to have fun. Everybody I interacted with was just amazing and we all worked together to do this thing. I spent the next two days unloading cars, sorting food, working in the back of a semi moving pallets, and loading trucks. As I was doing that, I just felt like this was what it’s all about. I’m not a super religious person and I’m not one to be able to recite all kinds of verses, but there was a calling to help people and I knew God was making it, so I just did it. Making other people happy and giving back has always been something I’ve done as part of the military and then working in healthcare. I’m not looking for a pat on the back for what I do, it’s just a passion and a calling for me.

When we got done with Thanksgiving Food Drive, I asked what else was going on and learned about Christmas Gift Drive and other initiatives that Crossroads has throughout the year. I helped out at Christmas and then with supporting the medical community with Fuel for the Fight and with any other things that were going on. I was blessed with the opportunity to join my site’s GO team as a group leader and even got invited to the Leader Summit.

Between GO initiatives, I didn’t want to just come on the weekends alone and sit by myself, so I got connected to the brew team and started serving as a master brewer. I’ve gotten to meet great people through that and just the camaraderie speaks volumes.

You don’t have to be somebody special to serve, and even if you are somebody special, other people on these teams usually don’t know it. You just come and be you. In doing that I’ve made many lifelong friends in a very short time. -Tony H.