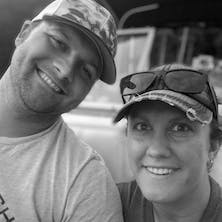 A Couples Camp leader told us, “When people go through hard times, they only want a rescue, not a recovery.” The summer of 2019 brought on the hardest trial we’ve ever known.

My husband, Manfred, grew up cutting down trees – his family heated with wood in the winter, and when we started dating, I started helping, too. We’ve been doing this together for years, so when a friend asked us to cut down a dead tree, we didn’t think twice about it. Everything went textbook perfect and it was nearly finished. But when Manfred went to make the back cut to drop the trunk, the trunk fell like no tree we’ve ever seen in our cutting history. It fell and his right lower leg ended up pinned between a tree limb and the tree trunk. The next 36 hours were a race to save Manfred’s life and his leg.

Once we had been admitted and treatment options were explored, we realized the worst of Manfred’s injuries was not the open fracture of his tibia. The orthopedic surgeon told us she wasn’t sure she should repair the bone and save the leg because the tissue to close the wound on the front of his leg was gone. For 36 hours we waited to see if he would qualify for reconstruction to save his leg. After heavily weighing the options and alternatives, we were told a plastic surgeon would try to close the wound. This would consist of the front of his leg having a skin graft 2” x 14” spanning the length of his shin, from knee to ankle.

And then the waiting game. Muscles had to be moved from his calf to his shin. Would that work? Will he walk? Run? Would the skin graft take? Would there be enough blood supply? How would his body respond? What about infection? Will the bone heal? What if… what if..

Every step — weighing each option — worrying about the possibilities and risks was paralyzingly hard. It was painful and fear filled our days. There was doubt. There were SO MANY QUESTIONS. And there was absolutely nothing we could do other than trust that God would see us through it, whatever the outcome.

When retelling the story now, Manfred is often known to say, “When you’re laying on the ground, bleeding with a tourniquet around your thigh, there’s no amount of money, intelligence, or problem-solving skills that will get you out of that. The only choice I had was to lay there and trust that God would get me through.”

While we definitely didn’t get a ‘rescue’ in this case and the recovery was excruciatingly hard, it has also been breathtakingly beautiful and changed us in ways we never would have thought.

The Crossroads Dayton community showed up and poured out love on us. People we had never met face to face brought us food. People checked on our kids. “Can I sit with you” while I waited for surgeries was asked and soothed my heart as I felt so afraid and prepared for the unexpected. And people prayed, asking for specifics as we faced each hurdle in recovery. We learned to praise God in the good times, in the small moments, and even the horrifically scary ones. And we were amazed to watch as Manfred healed and hit milestone after milestone of recovery. A year later, Manfred has full function back in his leg and we have a recovery story that can only come from our Father. -Heather S.