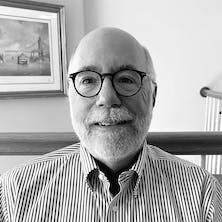 After years of going to church, my small group is finally helping me truly understand

I ran away from God and played the game of religion in my 30s, 40s, and 50s. I was going to major holiday services just because that’s what you’re supposed to do, but I wasn’t disciplined about or connected to church.

In 2007 my son and his future wife started attending Crossroads. They invited my wife and I to go with them. My wife was excited to attend given she was seeking some connection to a church community again. We went to that first service and I hated it! I did not like Brian Tome; he did not fit my picture of a minister as he stood on stage in jeans and flannel shirt. The music was okay but not church-like. There were no kneelers, prayer books, or hymnals. I was wondering what in the world we were doing. We walked out of the building after service and my wife said, ‘That was great! Let’s go back!’ She said the service got her thinking about her life and God. She enjoyed it. As spouses sometimes do, I went back week after week to make her happy.

Eventually, I started to get what Crossroads was about. I, too, started to reflect and think in new ways. I started to dance with God again. Yet I was not fully committed. Brian was up on stage telling us to get in a group. I had every excuse in the world for why I could not do that. Number one: I traveled during the week for work. The encouragement to join a group continued as did my refusal and guilt for not doing so. Once again church attendance became sporadic.

A few years later I was with a coworker in Fredericksburg, VA. He was an evangelical and over dinner we had an interesting conversation about God. I went back to my room and that is when I came to Jesus. I prayed, ‘OK, now I’m going to open myself up to you.’ I got back into the rhythm of going to church every week and of course Brian kept inviting us to join a group. I explored joining a group a couple of times but there was still a lot of ‘I can’t.’

Throughout all of this I had been in ongoing conversations with my friend Matt. We had been friends since junior high. A few other men we knew from high school gathered several times a year to socialize. When the pandemic hit, we did not see each other as much but Matt continued to encourage me and one of our other friends to read the Bible. He made multiple gracious invitations to join him in reading the Bible, but I always refused. I had tried by myself, but it was just too hard. Matt was a committed Christian but did not wear his faith on his sleeve. He wanted his friends, like me, to have what he had: a relationship with God.

Matt died suddenly of a massive heart attack on Jan. 4, 2021. I had talked with him the week before and he shared with me that his New Year’s resolution was to reread the entire Bible and said, ‘let’s talk.’ We never got that chance. He often shared that if he died suddenly, he was okay with that because he would be with God. He was ready.

When we went to church a week after Matt’s passing, Brian invited us to join Rooted. I looked at my wife and said, ‘I’m signing up.’ I had been doing this dance with God for too long. I wanted to truly know him and follow him like Matt did. I knew what it brought my friend, and I knew how important his relationship was with God. It would be a disservice to him but more so a disservice to me because I was squandering the gifts God has for me. I signed up to be part of a Rooted group.

After all those years of going to church I realized I had been a robot and not absorbing. I am a true neophyte. I do not know much about the Bible and now I am learning and speaking to God. I recently retired and transitioning to this new phase of life has been difficult, especially during the pandemic because it’s easy to go into a selfish space. Even while meeting on Zoom, I got so much out of my Rooted group. I learned about the Holy Trinity: God, Jesus, and the Holy Spirit. I am embarrassed to say I never understood this prior to Rooted.

From an intellectual standpoint it is stimulating to explore but from a spiritual standpoint I know I am exploring and learning because the Holy Spirit is coming through me. I am paying attention to that voice and I never would have done that before. I am not running away this time. I’m in for the long haul for what God opens up for me. - Bill K.