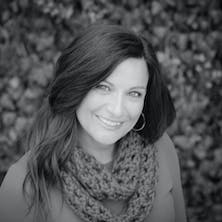 I grew up going to church three times a week, so by the time I went to college, I figured I had been enough for a lifetime and stopped. I still believed in God; I just didn’t have Christian community. When I started working at P&G, my mom was pushing for me to go to church and got me in touch with Vivienne Bechtold, who was levels above me in the company I loved. Vivienne seemed like a normal and cool person, and she told me about the church she had just started with some friends in the middle school near my house. I felt a little obligated to give it a try.

When I visited Crossroads for the first time, I was amazed to hear a message I understood and meet people who were normal and loved God and were simply trying to learn and grow in their faith. I felt like it was something I could get into. 25 years later, I haven’t left.

I like to take nothing and make it into something. It’s just who I am as a person, so I’ve had fun helping Crossroads grow since then. That started out with creating the first small groups we ever had. I worked with Steve Wanamaker to form the groups and coach the leaders. Through that, I even got to introduce him to his wife! At that time, I was single, and in my 20s, so I started a young professionals group that met on Wednesday nights. It grew quickly to have a leadership team of about six of us with 75 members. We met in the former convent next to the middle school. It was cool to see everyone’s skillsets come together to make it happen, and we even went camping and on vacations together. I’m still close to many of them. It was an example of how Crossroads is more than a building you go to or a space online. It’s about the community of people around you that creates an environment for you to grow closer to God.

Speaking of buildings, after Crossroads won the auction for the Oakley building, I was asked to lead the capital campaign. Raising money wasn’t my thing, but the leaders who asked believed in me and what I could do for God’s kingdom using skills God gave me to do something I had never done before. We worked with a fundraising consultant who estimated the best-case scenario that maybe we could raise $4 million. Working against that goal, I helped host events with only leaders at Crossroads to start gathering funds before going to the whole church. That night we had a goal of raising $1 million. After service, Brian and the band were waiting around while my team ran the numbers. We ran them once, and I thought it couldn’t be right, so we ran them again. Then, the clearest memory I have of Crossroads took place. I walked down the center aisle to Brian, who asked if we got $1 million. I said, “Brian, we got $4 million!” Everyone celebrated, but for me, that was the moment that it was so evident that God put His blessing on what’s happening at Crossroads and was moving here. I felt blessed to be a small part of God’s bigger plan in a place where he was moving. After that one, I led several other campaigns, just trying to use my skills in the place where God was moving, and during the last one, I met my husband.

Once we were married, I decided to take some time to focus on our relationship and eventually our three kids, so I took a step back from leading. My first return to Crossroads activities was a trip to Israel. On the last night of that trip, I overheard Kathy Beechem, who I had never spoken to, sitting about 20 seats away from me talking about launching some new women’s groups. My ears perked up, and I immediately moved down the table because she was someone I wanted to learn from. I let her know I would be interested in joining one of those groups. A few months later, Kathy called me, and I got to be part of her huddle for a couple of years.

After a while, Kathy encouraged me, saying I had leadership skills and that I was in a stage of life to do something with that now that my kids were a little older. I felt like I owed it to her and her legacy to do something, too, so I started a women’s Bible study group in my neighborhood. Within two years, while I did no recruiting, seven women wanted to form a leadership team to start a Christian group for local moms. Now we have about 100 women in Hyde Park, Mount Lookout, and Oakley who are part of Ignite. Less than a year ago, we started Ignite Dads, which includes more than 50 men. Once again, God just moved, and all of a sudden, some people wanted to do this.

During this time, one Saturday afternoon, I was taken by a life squad to the emergency room. Later, we learned that I had a massive heart attack and five episodes of cardiac arrests and was without oxygen for some time. Months later, when I was lucid enough to understand some of what had happened, I learned that about 300 people were praying for me in the Oakley chapel within hours of my being admitted to the ICU. I can’t believe that many people cared about me so much they would alter their Saturday plans. I’m more loved than I think I am, and God wants all of us to know that we’re more loved than we think. The reason I’m here is because of medical science and the team God blessed at UC Health, the paramedics, the therapists, everyone who took care of me – and their incredible skill set combined with the prayer of the Crossroads community. Put those together, and here I am.

Recovery has been a long road, but for months we had meals brought to our house three times a week, a friend from Ignite made ice chips out of Diet Dr. Pepper Cherry when I was unable to eat anything in the ICU, and people drove me to and from therapy three times a week. I learned when you invest in a Christian community like ours; it comes back to you in a time of need.

I recently sent a thank you note that included a verse that I genuinely believe describes the past 25 years of Crossroads: ‘In the Messiah, in Christ, God leads us from place to place in one perpetual victory parade. Through us, he brings knowledge of Christ. Everywhere we go, people breathe in the exquisite fragrance. Because of Christ, we give off a sweet scent rising to God, which is recognized by those on the way of salvation – an aroma redolent with life.’ 2 Corinthians 2:14-15 (MSG). -Tonia E.