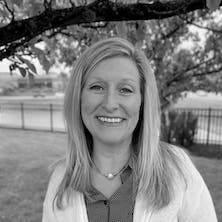 God led me to healing and redemption after abuse

My mom and I lived with my grandparents for the first few years of my life. My grandfather was a lot of things including a father, a hard worker, and a Sunday school teacher, and I loved spending time with him. He was also an abuser and predator and as far back as I have memories he was sexually abusing me and selling me to people in our community. That really messed up my perception of who God is and how he felt about me. I believed he existed, but I thought he was too busy to care what was happening to me.

I tucked all of that abuse and trauma in the back of my brain and went on with my life, keeping myself from feeling any real emotions. I got married, finished college, and we had three kids. I isolated myself from those relationships in many ways and eventually found myself in my mid-30s in a deep depression despite the family that I had, a thriving business, and so many other things that should’ve made me happy. One beautiful fall day I was driving my minivan wondering if I could drive off the road in a way that would end my life and look like an accident. I pulled over and started crying. In the middle of that desperate place I heard God speak to me. He told me, ‘I don’t want you to live this way. Call David.’ David was a family friend and former pastor. I argued a million different reasons I shouldn’t give him a call, but when I did he didn’t shame me or push me away, he helped me set up appointments for counseling and prayer.

Working through my brokenness took a long-term commitment to wanting to know the truth about who I am and who God is. Some days the sessions were really hard as I wrestled with ideas that God had abandoned me in some dark places and that I was defined by what happened to me and it was somehow my fault. I realized that for a long time I had been managing the symptoms of what had happened to me, how I felt about it, and who I thought I was. I realized that instead I needed the healing and restoration that Jesus had to offer me. He doesn’t want to just help us manage symptoms of our pain, he wants to heal us at the point of our loss and brokenness.

I found that he not only redeems relationships as I forgave people who hurt me and learned to feel and share love again, but he redeems places, too. One of the places where my grandfather used to sell me was a former paper factory, the very former factory where I now attend church every week at Crossroads Mason. He not only arranged finances and people and plans to make it the place where I worship but also where I was able to stand on a platform and share my story at the very place where my voice had been taken from me. Sometimes I come just to sit in the parking lot and pray when I need to be reminded God is in charge of things and hasn’t forgotten any of us. That he’s at work even when we don’t see it or feel it.

I often didn’t want to share my story with people because it just felt like too much. I could tell by the look on people’s faces. The first time I shared the whole thing was on a trip with Crossroads Mason to Israel. I decided to tell the group my story because I felt safe. I shared shortly after we visited the site of the Garden Tomb where Jesus had been resurrected. God has also brought things back to life in me because of sharing that story, and the people who were on that trip are the ones I could see sitting in the auditorium supporting me the weekend I shared from stage.

Since I shared my story publicly I’ve connected with many amazing women. Many of them wouldn’t have told their stories either. When I get a text or Facebook message that starts with ‘You don’t know me,’ I feel privileged that I get to hear those stories and that I get to help them feel like they’re not alone. Even my own mom has opened up to me about some trauma she experienced. I’ve been asked now to speak to different groups and share my story even further. Most recently I’ve been learning to be a trauma-informed trainer as a next step in this journey. I get to teach my first class in June.

I’ve realized through my life that God uses situations to teach us things and some aspects of God’s character are just not learned quickly. Healing is a journey. It takes perseverance, and God doesn’t waste any of the pain. He’s always teaching me something. At this point in my life I wouldn’t trade my story for anyone else’s because now I know God in a deeper way. -Robin W.