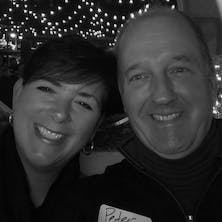 Faith and community has guided me through losing my wife

When I went to college, I became best friends with Heidi. We were friends for 10 years before I finally asked her on a date and then we got married when I was 30. We had an amazing marriage. We had two beautiful kids – Claire and Spencer – and went to grad school and got great jobs. When the company where we worked was sold to Procter & Gamble, we moved from New England to Cincinnati. My daughter didn’t enjoy the music at the previous church we attended, so we ended up at Crossroads in 2009. We jumped right in and were rolling along, made one move away for work, and then came back in 2013. We’ve been here even since.

Everything was going swimmingly until this past December when Heidi said she had a headache. She laid down, and soon after the kids had to call me and an ambulance because she had passed out. I assumed she was dehydrated or something and we would be home the next day joking with her about what happened. Instead, two hours later we were talking to the organ donation team because Heidi had a massive brain aneurysm. As we prayed together that evening, my daughter, in the wisdom of a 21-year-old, asked God that if he couldn’t bring her mom back to drop the hammer hard. That’s exactly what happened when Heidi passed away. It was a nuclear bomb dropped on our little family we referred to as the Core Four. I’m sad for my kids and I’m sad for myself.

We’re sort of all-in type of people. After we came to Crossroads, we were at one point $1 million in debt before we started on the Dave Ramsey program. Once we completed that and paid off all of our debt, we ended up working with Ramsey to film a video and we committed to paying for anyone who wanted to go through the program to do it. When we were challenged to tithe as part of a campaign several years ago, I didn’t want to do it but Heidi did. We made a pledge of $10,000 and put it in the pot at service. I slept on the couch that night. The next morning, someone came and told us that our roof needed to be replaced due to some weather damage but it would be covered by insurance. The total cost would’ve been $10,000. We’ve been tithing ever since and the other day I had to look up how much it even was because it’s just what we do. I was part of a Fathers group for 7 years until several months ago. Now I’m part of two different groups, one that meets in a greasy machine shop and the grief support healing group. We have been on a life-changing faith journey and financial journey and my kids and I are sitting on a bed of granite spiritually, relationally, and financially because of the community we have been part of for so many years.

Everything was going along so well, and this happened. The grief group has said to us that joy and pain can live side by side in your heart, and we can see that. Heidi’s faith was broad and deep, so we know she’s OK. I know she’s not having a bad day today. But the pain is just below the surface and it doesn’t take much to reignite it. We’re all three grieving through a different lens and it’s a very tricky road for a parent to navigate the grief journey. I’ve said to my group that I have two choices – either grieve or grieve and be in panic. I have no panic, I’m just sad, but I know we’ll be OK. One guy in my Fathers group has said it will be interesting to see how God uses our story in this next chapter of our lives. I’m processing being a single dad and living alone in retirement without my wife, my kids growing up without their mother, a sh*tload of paperwork, and going to Crossroads on Sunday mornings without Heidi. I feel like our challenge is to try to be well on this end of it and we’ll get together later when we go to heaven.

Isolation and getting into a ditch of self-destruction are bad for us. I’m trying not to isolate and to keep my kids from losing another parent to emotional spinout or whatever. I’m staying in community and staying positive. -Peter S.