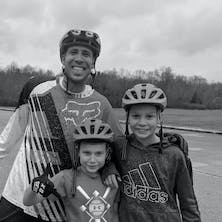 I grew up in a religious household but never really had a relationship with God. Anytime I would get in a hairy situation, I would turn to God and pray. I’m not sure how heartfelt it really was.

After I got married I had gotten a DUI and we were struggling financially. My grandma died and left me some money that helped with the financial situation, but I went back to drinking and driving quite a bit again. When my oldest son was born, I got in a car accident and received my second DUI. Things weren’t good, but my wife stayed with me. God definitely helped me with that second DUI as I was given a lighter punishment than I could have received so we weren’t impacted as severely financially. I’ve been sober since then. In the next three years things got better with work, better financially, and we had our second child.

We ended up moving to a new house that required a bit of financial risk and then I got a job offer that would require a move to Nashville. I was definitely praying during that time and my wife kept saying she wanted our family to start going to church. I said I was good and didn’t have time for it. During the whole process, though, I felt like God was talking to me a lot. There was a couple weeks stretch where everything just pointed me to take the job, so I finally did.

My wife still kept pressuring me to go to church and I kept putting it off. Then we were talking to my 10-year-old and asked if he knew what Easter was. He said it was Jesus’ birthday. That’s when we realized we definitely needed to go to church!

My wife, Becky, reached out to Ashley, who was married to my childhood friend Sean and had taught our kids in first grade. Becky had helped in the classroom a lot and told Ashley she wanted our family to be more like hers and asked where they went to church. They were part of the Crossroads Batesville community.

I agreed to give it a try. I pulled up and I’m like, ‘This isn’t a church, this is some guy’s house.’ I am not exaggerating when I say I about dropped the wife and kids off and left. I ended up going and everybody that was there was very warm and Chuck gave a sermon that really hit home. I was really intrigued by it, so we started going to church at Scott’s house regularly.

Eventually, I took a different job where I travel a lot but have more time at home with my family that has been a blessing. Now I’m part of a small group with Sean that meets every Tuesday morning and our family attends weekend services at a Crossroads site.

God keeps bringing people into my life that make my relationship with him greater. For example, my relationship with Sean came full circle. We were nemesis in first grade to the point that led to both of us being suspended. Eventually, we became close friends but took different paths in high school – he joined Young Life and I did my own thing. Our paths crossed again when his wife taught my kids and now he’s an important part of my community. It’s crazy how God works and it has been so good for our family. My sons even have relationships with Jesus and read the Bible.

Now when I listen to things from Crossroads like parenting advice, I see that they’re things I didn’t know to do but had been doing all along. Crossroads has just fit so well into my life and where I was and I can see how God was part of my life even before I realized it.” __-Matt H. __