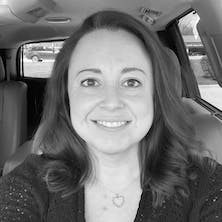 I had a moment as I was singing at Couples Camp this spring about how far God has led me in just 14 years. He has healed so much in me, and I’m now happily married to a man I love. It wasn’t always this way. 14 years ago my relationship with God, men, myself, and more looked very different.

I grew up in a home with a Christian mom; but my dad wasn’t a Christian, so he and I always had a strained relationship. My relationship with the church was also not great. It was more about religion and checking boxes—and then looking down at others who checked fewer boxes than I had.

Then, at 29 years old, I began to struggle with clinical depression. I tried several medications but was still struggling with suicidal thoughts often. One Sunday I was on my way to church and thoughts of wanting to end my life were strong. I asked God to give me something to hang onto when I got to church. The message that day was about the rod of Moses. Very biblical—and with three alliterated points—but it encapsulated everything I had felt about church being doctrinal and head knowledge. I knew there had to be more.

Someone at work invited me to Crossroads. Despite the stigma in my head about nondenominational churches, I gave it a try in February 2008. It was the first Sunday of the Consumed journey, and it was the most powerful, relevant, helpful message I had ever heard in my life. It met me exactly where I was, and each week that I came back to Crossroads, I found another thing I wanted to work on. God began speaking to me about my personal relationship with Him in a radically different way.

After that, anytime prayer was offered, I made a beeline to it, desperate for healing. I was eventually diagnosed with major depressive disorder and went through another series of prescription medications that would work for short periods and then stop. But eventually, I realized one summer that I had been better for a week, and then longer, and then longer. And the length of time without a suicidal thought continued to grow. I realized that God healed me, and that he had used some of these dark times to help me see differently. He had helped me work on my strong personality that used to be filled with critical words and a lack of compassion. I started leading a small group, and those experiences brought even more life change.

Fast forward a few years, and I’m married! I asked him to start going to Crossroads with me, and he did. I eventually asked him to go to Couples Camp, and he did. We joke often that had we been the 1.0 versions of ourselves, we never could’ve made marriage work. God did a lot of work on me to better understand what other people were feeling and thinking; and to see that I had sometimes been the source of their hurt. I had to humble myself and ask for their forgiveness. I had to do these things before a real dating relationship would work, much less marriage.

I never thought I would be here. The things I thought I wanted for me pale in comparison to what God has done in me. - Angela K.