MCX:
YOU NEED A TRIBE

I was in the wilderness of Arizona in October, adventure riding with some of my pals. We’ve done a bunch of these trips over the years and it turns out that Arizona has some of the toughest, most rugged trails we’ve encountered.

We quickly transitioned from the pavement of Phoenix to the rocky canyons and hills of eastern Arizona. FYI: Every town you’ve ever heard of in Arizona is really just a suburb of Phoenix. Scottsdale is basically their Mason. Once you get outside of the greater Phoenix area, it gets real primitive and real remote, real fast. Like no cell service, no 911, no nothing. Less than 1 person per square mile.

We were way in the back of beyond when we found a white toyota Tacoma stranded halfway out of a dry streambed. A couple of photographers, Steve and Taylor, had been exploring when they came across a washed out section of trail. They tried to ford the mostly dry stream rather than turn around. They quickly discovered that a stock 2wd Tacoma SR5 with street tires is basically a Camry with a big space for groceries. We got off of our bikes and spent the next 4 hours beating up Steve’s truck and using every bit of hillbilly ingenuity we could to get it out of the stream and back onto the trail. At one point, when we finally had the back wheels on the trail, we decided we had to jack the front end up so we could get it over the top lip of the trail. Then one of us got carefully into the driver’s seat and mashed the accelerator to the floor, jolting the truck backwards off the jack. The truck crashed violently back to the ground a couple of inches closer to being back on the trail. We were pumped! We kept inching the truck back onto the trail that way. Digging out the hillside, stacking up rocks and resetting the jack again and again. Finally, after over hours of working to get them unstuck, we said our goodbyes and they headed back the way they had come. We were all totally whipped so we set up camp right on the trail, boiled some food and had a cold beer, and then crawled into the sack. 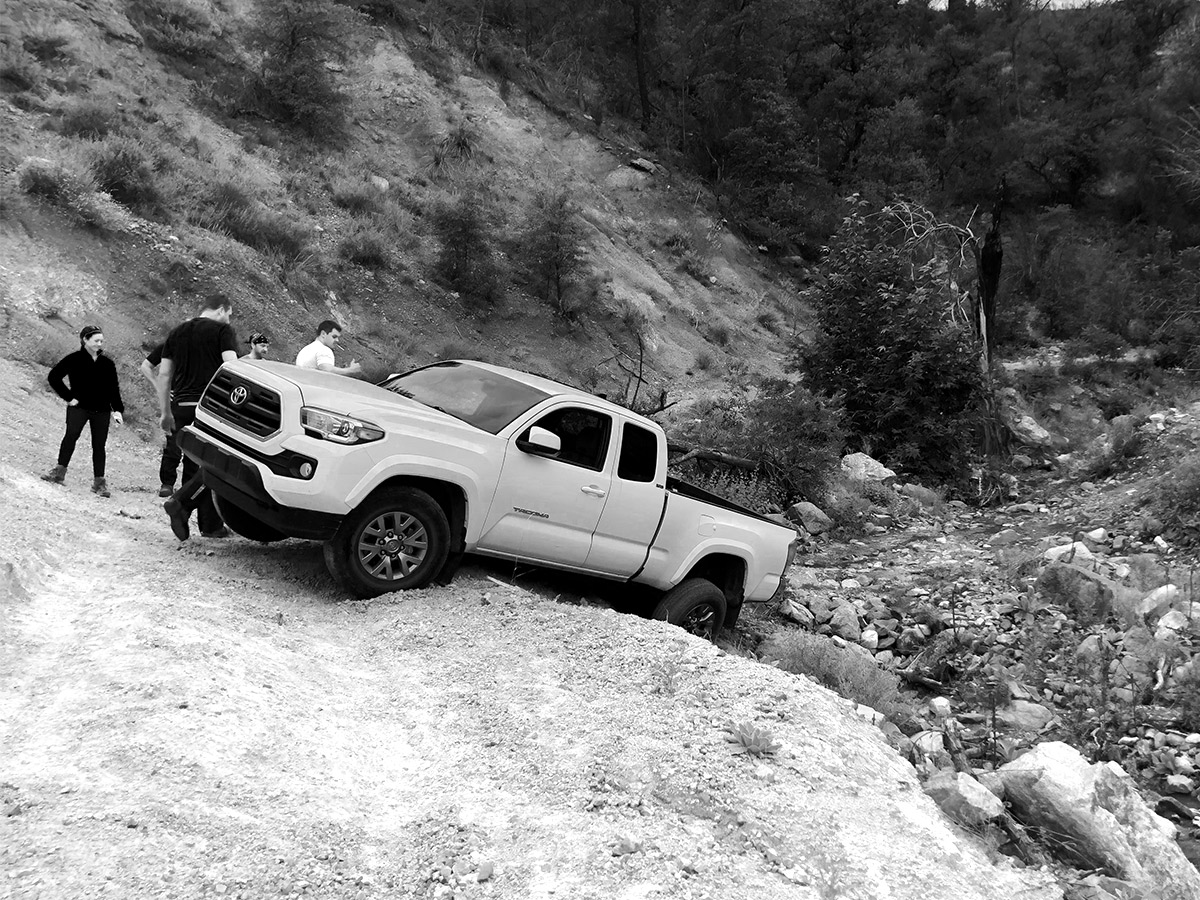 Steve represents a lot of us. Out there way over his head and totally on his own. When he got stuck it was all on him to figure it out. No-one to lean into. No-one to ask for advice, prayer or a little muscle. We showed up and just went to work, all of us together. We never considered otherwise. That’s what our tribe does. In November a Taylor wrote us a letter thanking all of us for our help. In it she mentioned that she was in awe of what we accomplished and how we worked together. The part she was most stunned by was that we did all of that with a sense of humor. You see, she wasn’t familiar with what a tribe can accomplish. What men oriented around a common goal can do in the face of whatever challenge is put in their way. She couldn’t understand the joy that we found in being united in that purpose. A bunch of guys sitting around getting real but not stretching themselves and going after something is as worthless as a bullet without a gun. You need purpose. You need action. You need a tribe.

The world is telling you to be a Steve. I am telling you that that’s total crap. The Bible tells us that we’re not supposed to be solo losers. We’re supposed to work together and help each other out. That we suck if we don’t. (ECC 4:9-10 NJW) At MAN CAMP you’ll be surrounded by thousands of men, all stumbling towards Jesus together. Every single one of us broken and burdened in some way. Some of us may have the same challenges as you. Some may have already overcome that challenge and be able to help you while you do the same.

We’re a tribe and we’re all in it together. Join us.

See you out there,
Judd Watkins
Adventurer | Creator | Son