MAN CAMP:
THE COURAGE TO JUST BE ME

“Treat him like you would your other two kids.”

That was the advice the doctor gave my mom about how she should raise me. Of course, I wasn’t like the other two kids. Today, I’m a grown adult and stand about 4’4” (not a typo) while my siblings are both around 6 feet.

Tall or short, life is painful and it sucks a lot of the time. Even when you’re blessed with childlike ignorance there are things that make it through your walls. I remember a lot of painful things kids said to me when I was young. Some were kinda funny, like “Is he real?” but mostly it was the laughing that cut the deepest. Have you ever had people just look at you, point their fingers and laugh for no cause other than the way you look? Yeah. It hurts no matter how old you are. Somehow I dodged most of it, but still got hit by a lot. I specifically remember the first day of 4th grade at a new school, and peers laughing at me like there was some inside joke that I wasn’t a part of. I remember thinking to myself “It’ll be OK, they don’t know me yet,” and it was OK eventually...but it still hurt.

I still think about moments like that pretty often. We may all be grownups at this stage in life, but every time I run across the street in front of stopped traffic I wonder what the conversations are like inside the car. I imagine people picking up their phones to record, saying “OH MY GOD! THERE’S A LITTLE PERSON RUNNING IN THE STREET! HE’S RUNNING! THIS IS SO FUNNY!”

It’s all the same. They’re just better at hiding it than they were as kids.

I think I got better at hiding too. Once I graduated high school I sought refuge with Christian peers because they had to be nice, right? Some were, some weren’t. It was a mixed bag. Ultimately I started seeing patterns - stay away from kids and uneducated adults. So that’s what I did. I tried to make myself as invisible and unassuming as possible. That worked until my wife and I started having kids. We started hanging around places that kids go to, such as schools, parks and the zoo. Hard to hide in those places. I kid you not, this actually happened a few years ago, my family and I were at the zoo and a huge tiger was up against the glass standing on its back paws. It was probably 8 feet tall and a marvelous sight to behold. Or at least I thought it was, until a bunch of school kids came up to the exhibit. I stared at the tiger. They stared at me. It made me feel like maybe I should’ve been on exhibit instead of the tiger.

Last spring all of this weight was piling up internally and I started to realize the toll it was taking on my life. I had a hair trigger, would get angry or frustrated with people, especially at work. I started to blame a lot of my problems on my physical stature. I had tried to hide long enough, so at the advice of a friend and my wife, I started seeing a counselor. One session in, this was the entry from my journal:

March 3, 2017
I’m slowly uncovering new truths about myself. I met with a counselor last week and he helped me to uncover some stuff. The main thing being that deep in my subconscious I’ve set myself up to blend in - which means “take a back seat, don’t speak up, don’t make any sudden moves otherwise people will stare. They already stare, you’re already a novelty, DON’T MAKE IT WORSE!”

I can’t believe it took me this long to realize the lie. In turn, it’s impacting almost every aspect of life.

The lie was that I am just Dave Kendall, little person. And not Dave Kendall, son of the King. Once I could see that, things quickly turned for the better.

[entry continues]
We went to the park today and Ezra wanted to play. I said, “No.” Then I asked myself, “Why?” and soon realized it was because I didn’t want to stand out or make a scene. Then I realized that wasn’t my problem and I really didn’t care what others thought.

We played, had an amazing time and I’m pretty sure I cried on the way home. This is what freedom feels like.

Freedom. Freedom from chains I didn’t even know I was carrying. I had believed I was somehow unworthy because of how I was born and the only way to live was to either fade into the background or perform my way to the top where I could demand respect. The chains had been with me for so long that I thought they were a part of me. Somehow, through God’s grace I was able to see that I was more concerned about what people thought about me, rather than what God thought of me. Once I was able to see the truth, those chains fell off in an instant and I had a taste of God’s goodness right there in the middle of a park. My previous identity was gone and what was left was someone with so much less fear and a whole new confidence to be who God created me to be.

I’m not done yet. I’m still learning what it looks like to turn off the lies, to identify them when I hear them and tell them to shut up. I still brace myself a little when I go into unfamiliar territory where there might be people that stare or say hurtful things, but then I remember that’s not who I am. I lean forward and trust that God put me in such a place, in such a time to show people that there’s a lot more to me than just my height. 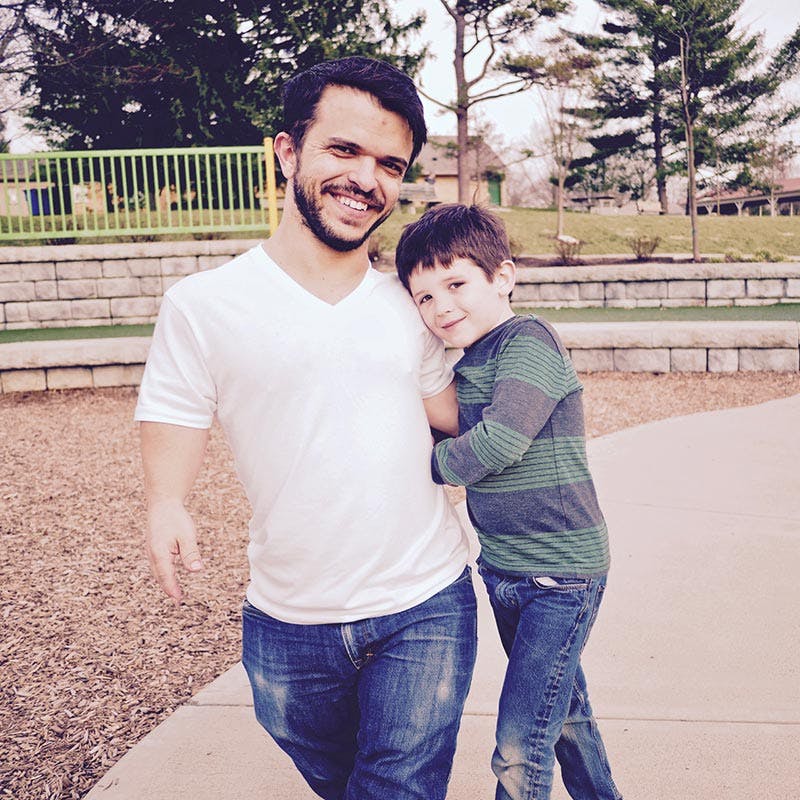